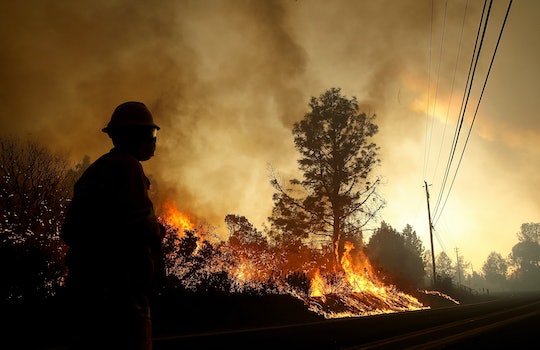 What Does Wildfire Smoke Do To Babies & Toddlers? Here's What You Should Know

The Paradise, California, wildfire known as Camp Fire is one of the deadliest and most destructive wildfires in California’s history, as CNN reports. More than 600 people are missing, and the death toll is now at 63 people. The toll continues to grow as rescue workers search for remains and police staff go back through calls from when the fire initially started a week ago. Families lost everything, from belongings to pets to sometimes even other family members. And now parents have another worry: How does wildfire smoke affect toddlers and babies?

As an article on the Children’s Hospital of Colorado website explained, wildfire smoke is actually a bit different than smoke from a house fire, and it affects children differently. “Wildfires often cast ash and other irritants into the air, which may cause breathing problems for children, especially those with underlying respiratory problems,” the article noted. As is often the case, these health hazards are more of a threat to the elderly and young children.

A study published in the U.S. National Library of Medicine National Institutes of Health found that smoke inhalation causes “profound changes in cardiac and pulmonary physiology” in pediatric patients. It damages their young and still growing lungs, which can lead to “prolonged mechanical ventilation, increased mortality with [associated] injuries, and long-term pulmonary complications.”

As per the CDC, children are more likely to be affected by health threats from smoke than adults. Children’s airways are still developing, for one thing, and they breathe "more air per pound of body weight" than grown-ups. Plus, kids spend more time outdoors to begin with in general. The study also stated that smoke “generated from wood” has high concentrations of carbon monoxide. And unfortunately, wildfire smoke can last for days or months, depending on how bad it is. Since the Camp Fire in California is the worst in California’s history, it's safe to say it's going to take quite some time for the effects to fade.

Things to look out for in your toddler or baby include increased coughing and wheezing, labored breathing, change in color of the skin, fatigue, and decreased activity levels. To keep your children (and yourself) safe, the CDC also recommended checking your local air quality report every day, consulting visibility guides, keeping your windows and doors closed, and avoiding activities that increase indoor pollution, like burning candles, fireplaces or gas stoves. (Vacuuming can cause problems too, believe it or not.)

If you must go outside, the CDC highly recommends using an N95 or P100 ventilator mask, as these are the only ones that work and are approved by the National Institute of Occupational Safety and Health (NIOSH). Still, it’s definitely best to stay indoors as long as possible, since that's the safest thing you can do to prevent respiratory effects from the wildfire smoke. Even after the fire is contained, be aware of the ash and other lung and eye irritants that could be in the air as the aftermath is cleaned up.

Bottom line: Please keep babies and toddlers away from danger zones as much as possible until the coast is clear.