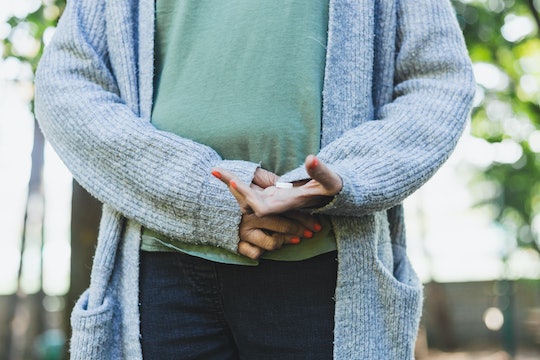 Here's How Your Period Can Cause You Anxiety

There are lots of different symptoms that accompany a menstrual period: cramps, bloating, fatigue, nausea. But does your period cause anxiety? Turns out, period symptoms aren't always physical.

Dr. Melisa Holmes, an OB-GYN specializing in pediatric and adolescent gynecology and co-founder of Girlology, tells Romper that before answering this question it's important to distinguish between "anxiety" and an "anxiety disorder." The two are often used interchangeably, but there's a distinct difference. While anyone can deal with varying degrees of anxiety, an anxiety disorder is something different entirely.

"Anxiety is necessary and healthy in many settings (optimizes performance, motivates us, keeps us safe, etc.), so some anxiety is normal," she says. "When anxiety paralyzes us or interferes with our functioning, it becomes problematic, and when it affects our functioning on a daily basis for an extended period of time, it becomes Anxiety Disorder — a medical diagnosis."

So for some, anxiety can be a source of anxiety based on a variety of factors. "For those who start their period for the first time and aren’t prepared or aware of what is happening, it can be terrifying, but may only be short-term," Holmes says. "For menstruators who don’t have the resources to manage their flow or their products don’t reliably manage their flow, that anxiety becomes recurrent and can begin to erode their self esteem and confidence. And for those who live in a culture or family where they are shamed or shunned because of a normal bodily process, the anxiety from that can have a lifelong impact on things like self-worth, educational attainment, and mental health."

But it's not just outside and other health factors that can cause anxiety during menstruation. Hormones also play a role. Dr. Amanda Tinkelman, a psychiatrist practicing in New York, tells Romper that some people who menstruate are sensitive to the hormonal changes that occur in the "late luteal phase of the menstrual cycle, including possibly the reduction of progesterone and estrogen. There appear to be differences in people’s genetic susceptibilities to developing mood symptoms premenstrually, and there may be structural and functional brain differences, as well as differences in the body’s stress response, that all combine to put people at different risk levels for developing changes in mood around their periods."

Progesterone is believed to have the biggest impact on mood and anxiety because of how they impact a person's serotonin and dopamine levels, Holmes says. "After ovulation, progesterone becomes the dominant hormone, then it drops off as the next period begins and estrogen takes over again. For people who experience premenstrual moodiness or anxiety, it typically disappears after the period starts because of this."

But period-related anxiety can go beyond the well-known, stereotypical mood swings associated with menstruation. Holmes says menstruation can cause and exacerbate other mood disorders as well, especially depression. "We see premenstrual magnification of many mental health symptoms, and there’s also the diagnosis of premenstrual dysphoric disorder," she says.

Premenstrual dysphoric disorder, or PMDD, is defined by Johns Hopkins Medical as "a much more severe form of premenstrual syndrome" of unknown cause or origin. Symptoms can be psychological (including but not limited to moodiness, anxiety, and depression) as well as physical (from respiratory to neurological to gastrointestinal). People with a family history of PMS or PMDD, as well as those with personal or family history of depression, postpartum depression, or other mood disorders, appear to be more susceptible.

While periods may exacerbate feelings of anxiety in people with anxiety disorders, Tinkelman says, "If someone finds they become anxious predictably around before their menstrual cycle begins, and finds relief within a few days of menstruation, they may have PMDD and not a primary anxiety disorder."

In order to determine whether or not your period is causing or worsening your anxiety, or causing PMDD, Holmes suggests tracking your symptoms.

"You can use an app, a calendar or a notebook, but find a way to keep a log of your periods and rate your anxiety symptoms daily," she explains. "If your anxiety scores/symptoms are higher before or during your period each month, you’ve got your answer. Remember that anxiety isn’t always feeling jittery and scared; it can show up in a lot of ways: fatigue, restlessness, feeling on-edge, poor focus, muscle tension, irritability, isolation, sleep changes. The is also a lot of cross over with the symptoms of depression, and often they co-exist."

Whether PMDD or the more typical anxiety and mood swings related to PMS, there's no question: for those enduring these feelings every month or so, it's not fun. Fortunately, both conditions can benefit from treatment.

"Some people who develop anxiety symptoms in response to their period find relief with over-the-counter and natural remedies, such as anti-inflammatories, mild diuretics, and various supplements that [reduce anxiety]," Tinkelman says. She adds that relief may also be found in relaxation, sleep, or physical activity, but that the efficacy of these steps vary from person to person. She also notes that prescription medication may be warranted for some people.

"Hormonal contraceptives that regulate hormonal changes, or sometimes antidepressants that some people take just at certain points during their menstrual cycle may also be useful," she says, noting that promising research may one day serve to help those who have yet to find sufficient relief.

"One exciting newer line of research," she continues, "has been into how a metabolite of progesterone, called ALLO (allopregnanolone) ... might be a novel treatment for people with mood disorders, such as perinatal mood and anxiety disorders, as well as depressive disorders outside of the perinatal period."

So, in short: yes, your period can cause or exacerbate anxiety. What you're feeling is real and, fortunately, there's help out there that may be able to ameliorate your symptoms.