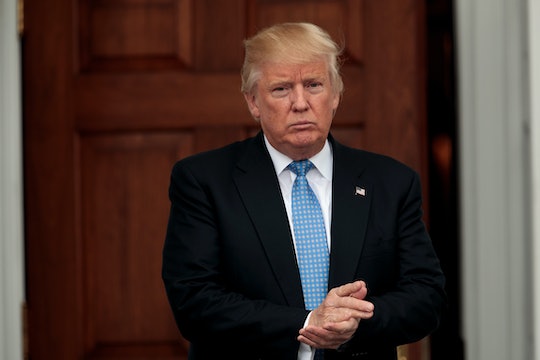 After spending more than a year on the campaign trail making controversial statements and insulting nearly every minority group in the nation, the president-elect has a simple Thanksgiving request: unity. In a surprising Thanksgiving video released Wednesday, Donald Trump told the country he's praying we can "begin to heal our divisions and move forward as one country" — even as white supremacists (a group he's since disavowed) masquerading as a legitimate political movement salute his name and his election has sparked a debate about whether Muslims should have to register with the U.S. government (or whether they should be allowed into the country at all). In short, for many, the message felt like an ineffective call for togetherness from the president-elect who previously seemed to make it his mission to homogenize America's people.

"We’ve just finished a long and bruising political campaign. Emotions are raw and tensions just don’t heal overnight," Trump said in the video, which was released on social media, looking into the camera. "It doesn’t go quickly, unfortunately. But we have before us the chance now to make history together, to bring real change to Washington, real safety to our cities, and real prosperity to our communities, including our inner cities."

The sentiments Trump expressed in the address echo those of the speech he gave shortly after winning the election unexpectedly. At the time, Trump recognized that the country would have to make an effort to "bind the wounds of division" and pledged to "be the president for the American people." He also reached out to his detractors:

For those who have chosen not to support me in the past, for which there were a few people, I'm reaching out to you for your guidance and your help so we can work together and unify our great country.

(There were more than a "few" people who did not support him, a fact made all the more starkly clear as vote tallies continue to widen the popular vote victory of his opponent, Hillary Clinton, by more than 2 million votes and counting.)

Trump, of course, faces a formidable task in his quest to unify the nation's diversity of people — many of whom feel hurt by his campaign rhetoric and overtly threatened by the prospect of his presidency — under his rule. And he's not off to an especially promising start, having appointed an alleged white nationalist and former head of Breitbart News, Stephen Bannon, as his chief adviser early in the transition. (Bannon has denied those claims.)

Additionally the rash of instances of intimidation, harassment, and even violence against minorities swept the nation after Trump's election, with some of his supporters reportedly committing egregious crimes like allegedly forcing Muslim women to remove their hijabs and defacing public and private property with racist graffiti, oftentimes overtly in Trump's name. Many argue that these perpetrators felt emboldened by the election of a man who telegraphed unabashedly xenophobic and racist views throughout his campaign.

But as he prepares to take over the Oval Office in January, Trump says he wants to move forward together, and wishes to "enlist the effort of our entire nation." It's a refrain that's actually reminiscent of Clinton's "Stronger Together" campaign slogan. At the end of the day, though, Trump will be the next president, not Clinton, and the nation will proceed, whether it's figuratively divided or not.