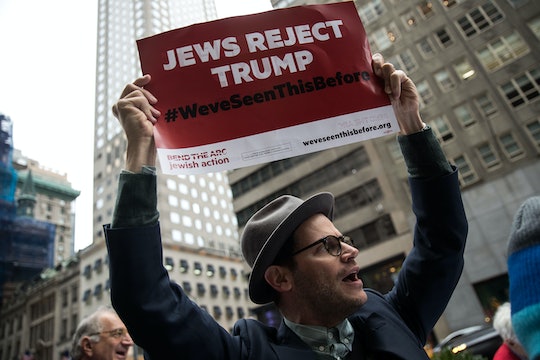 Hate Crimes Are Worse After Trump’s Election Than They Were Post-9/11, & It's Just Awful

If the incendiary, racist rhetoric that Donald Trump employed throughout his presidential campaign uncovered the teeming underbelly of bigotry and outright white nationalism among some Americans, then his election to the nation's highest office legitimized those feelings. At least, that's the belief many of Trump's most fervent supporters seem to now have, as they're apparently now emboldened to spew their venom and violence on minority Americans across the country. Now, the fear that a Trump presidency will make this country demonstrably more dangerous for Americans of color and other vulnerable populations has manifested in reality, because the spike in racist incidents and hate crimes after Trump's election is even more severe than it was after 9/11.

It's really no surprise that this is the case, given that Trump has mainstreamed Islamophobia and vilified Latino immigrants in an unprecedented way, and that former KKK leader David Duke classified Trump's victory as "one of the most exciting nights of my life" on Twitter. Still, it's supremely upsetting that the Southern Poverty Law Center, a nonprofit legal advocacy organization, has received reports of more than 300 racist incidents across the country, according to CNN.

And Trump — the man who routinely called for violence at his campaign rallies and once even insinuated that "Second Amendment people" could "do" something about his opponent, Hillary Clinton — had a brief message for his band of crusaders during a pre-recorded 60 Minutes interview that aired Sunday: "Stop it."

But Trump's weak stance now that's he's won does not erase the rampant xenophobia and racism that were the hallmarks of the campaign. According to USA Today, the spate of hate crimes and other race-fueled incidents now infesting the country appear to be outpacing those that the terrorist attacks of Sept. 11, 2001, inspired against Muslim Americans 15 years ago. "Since the election, we've seen a big uptick in incidents of vandalism, threats, intimidation spurred by the rhetoric surrounding Mr. Trump's election," president of the Alabama-based Southern Poverty Law Center Richard Cohen told the newspaper. "The white supremacists out there are celebrating his victory and many are feeling their oats."

And here's what "feeling their oats" looks like in Trump's America: Graffiti in a Minnesota high school bathroom that reads, " "Whites only," "White America" and "Trump," according to CNN. Black University of Pennsylvania freshmen receiving messages that scheduled "daily lynchings" from a person going by "Daddy Trump." A man in Michigan threatening to set fire to a Muslim college student if she did not remove her hijab. A black doll hung from a curtain rod at a college in New York, photographed and made into a meme about "Trump fans." Students in a Pennsylvania high school chanting "white power" and holding Trump signs. A gay man attacked in Santa Monica after leaving the bar where he had been watching the outcome of the election become clear.

So many incidents are exploding across the country that New York Daily News justice writer Shaun King has converted his Twitter page into a space to showcase reports of many of them — and it's a devastating tapestry of hate.

There's really no way to know how closely Trump himself is monitoring these unacceptable developments that stem directly from his candidacy and win. After all, he may be too busy receiving extra tutoring about how to handle the sheer scope of the presidency from President Obama, the country's first black president whom Trump tried for years to delegitimize by spewing the unfounded lie that he was not born in the United States. Trump must recognize that he is the root cause of this problem, and that although he did not invent racism and homophobia, he has provided it was a platform in our government that is reminiscent of the Jim Crow era.

He's our president now, and he must commit himself to not repeating the egregious sins of his campaign. There's no abolishing them from the public consciousness, though; the damage is as irrevocable as it is shameful.