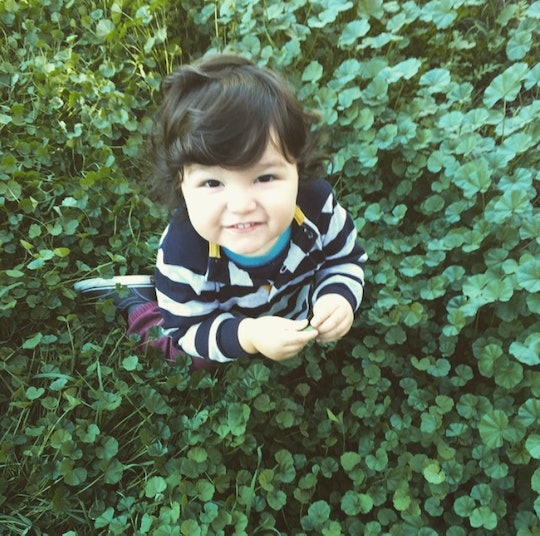 I'm Raising My Mexican-American Child In Trump's U.S. & This Is What It's Like

Every parent worries about their child, but recent events have made this an especially worrisome time if you’re a Latino parent. I'm on the cusp of raising my own Mexican-American child in Donald Trump's America, and the reality is terrifying. Trump, the frontrunner in a major party’s presidential primary, has said outrageous things about Latinos, specifically Latinos of Mexican descent. Following his Super Tuesday win, Trump told a packed crowd: “[Mexico is] killing us on the border. Absolutely destroying us on the border. They're destroying us in terms of economic development … we have to stop it, folks. I know how to stop it.” But the attacks didn’t just begin there. They started when he announced his bid for presidency, declaring that, “When Mexico sends its people, they're not sending their best. They're bringing drugs. They're bringing crime. They're rapists.”

I didn’t think much about race until I was 11 years old and I heard someone say that Latinos were all “wetbacks.”

He also praised the mass deportations of Mexican-Americans that occurred in the 20 century. I don’t think Trump or any of the people who support him stop to think what it’s like to raise a Latino child in this environment. When he says he wants to make great America great again, I can’t help but feel that this America doesn’t include people like me and my family.

Kids are aware of race — they have eyes — but they don’t worry about it, they don’t assign it value until they’re taught that they should. I didn’t think much about race until I was 11 years old and I heard someone say that Latinos were all “wetbacks.” That same year, voters in my home state of California passed a ballot initiative that banned all undocumented immigrants from using state services like schools and hospitals. At that time, I had relatives who were still undocumented. I didn’t want to think about race, but other people made sure I did.

Latinos are not just the people who clean toilets like Kelly Osbourne said. We are famous painters like Frida Kahlo, Supreme Court Justices like Sonia Sotomayor, and Academy Award-winning directors like Alejandro González Iñárritu.

Things should be different now. That should have improved. I should be able to raise my toddler son without worrying that, though he may grow to be as smart and talented as his white peers, he will always be discounted because of the color of his skin or the etymology of his name. But I can’t.

I know that Latinos don't hold a monopoly on being marginalized. Young African American men are being killed by white police officers. Trump said we should create a database for all Muslims, a proposal all too reminiscent of tactics the Nazis used against Jews in Germany. But I also can’t deny the specific portrayal of Latinos in the news and the shows we watch as homogenous, one-dimensional figures. Latinos are not just the people who clean toilets like Kelly Osbourne said. We are famous painters like Frida Kahlo, Supreme Court Justices like Sonia Sotomayor, and Academy Award-winning directors like Alejandro González Iñárritu.

Because these stereotypes persist, I have to think long and hard about the role race should play in my son's upbringing. I lie awake at night agonizing over our choices. My partner and I want our son to be proud of his heritage. My parents are immigrants from Mexico and Guatemala, and my partner's parents were raised in America but are of Mexican descent as well. I grew up speaking Spanish at home and visited my parents hometown's on many occasions. We're deliberate about purchasing books in Spanish and reading to him in the language I (and his father's parents) grew up speaking. We look for amazing bilingual books, like Lil' Libros, that teach children Spanish words but also about our Latino culture.

But as much as we want him to honor our heritage, we want him to honor the backgrounds of others too. We make sure that he is surrounded by books that depict children of all races and backgrounds, as well as those that encourage him to learn about social movements that have made an impact on people of color, women, and on those who perform manual labor.

My child will not only have to learn complicated math and science, he'll also have to learn to navigate the complexities of being a person of color in world where most institutions are dominated by white cis-gender males.

On a basic level, we try to limit television (most of the time), but when we do watch I make sure we watch shows that at least make an attempt to promote diversity and equality — such as Daniel Tiger and Doc McStuffins. When we discuss where our son should attend school, we talk at length about our desire to make sure he is around children of a variety of races and socioeconomic classes, but those types of neighborhoods are harder and harder to come by in our native Los Angeles. Our own hometown is now predominantly Latino, which means we work even harder to give our son a diverse upbringing that involves all colors and all classes.

Maybe this level of attention to his education and environment seems like overkill, but that’s not how we see it. This isn’t about “enrichment.” It’s about positioning to him to make the choices that will guarantee doors or open, not closed to him. And frighteningly, it’s also about his safety.

My child will not only have to learn complicated math and science, he'll also have to learn to navigate the complexities of being a person of color in world where most institutions are dominated by white cis-gender males. Even though our population has become more diverse, many elite colleges and workplaces remain unchanged in staff and philosophy. So I have to raise my son to succeed in those arenas without losing himself. I have to teach him to feel and show pride in his background, but I also have to teach him to be careful because if he were to ever break a rule or engage in reckless behavior, as young men often do, he might face harsher punishment simply because of the color of his skin. And I have to make sure I don’t talk to him too much about any of this, or else he'll feel like he's already a victim and powerless to change the system.

"You are a great girl; I had never met a Spanish person who went to college before."

When he was raising his children, Donald Trump didn’t have to think about any of this.

When I get frustrated and upset about that, I try to think of this as an opportunity. My son’s father and I grew up in an environment that encouraged us to suppress our heritage to fit into the mainstream American culture. I grew up always having a foot in both worlds. In college, I was transformed. I studied political science and graduated determined to change the world. But then when I was working in Hillary Clinton’s presidential campaign in Iowa as a recent college graduate, a very well-intentioned supporter said to me:

You are a great girl; I had never met a Spanish person who went to college before.

The comment (and backhanded insult) sliced me to my core. I know dozens of Latina college graduates. That experience taught me that I can’t keep people from stereotyping me. What I can do is own who I am. I am college educated, and a homeowner. I am also a woman of color, and because of the opportunities I've had, I have the privilege of making a difference. So I'll start with my son, carefully preparing him for the world we live in now while also working to change it by the time he has to walk into it on his own. My biggest hope for him is that he'll fight different battles.