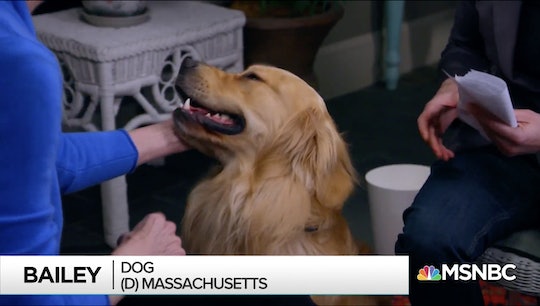 Elizabeth Warren's Dog Bailey, A Very Good Boy, Swiped A Burrito & No One Is Mad

After the nation learned that she's no longer in the running as the 2020 Democratic presidential candidate, it looks like Sen. Elizabeth Warren's dog Bailey isn't taking the news too well, swiping someone's burrito from a table at her campaign office with absolutely zero regrets.

On Thursday, Warren announced she has ended her presidential campaign, two days after suffering some disappointing results on Super Tuesday, dropping into a distant third place behind fellow Democratic candidates, former Vice President Joe Biden and Vermont Sen. Bernie Sanders. The results came as an unfortunate surprise to many of Warren's loyal supporters, including her most loyal of supporters — her sweet golden retriever Bailey.

While it's presumed that Bailey will be excited to have Warren home in Boston with him so they can go on walks and hang out more, perhaps he felt her own sorrow more keenly than one might suspect. Because during a visit to her campaign office after the news of her departure broke, Bailey swiped someone's burrito, despite being universally known as a very good boy.

In a video shared by Warren's press secretary Gabrielle Farrell on Twitter, someone can be heard full on accusing Bailey of thievery. "Bailey you stole it!"

Now, it seems only fair to note that the sweet boy might have been given permission, although all signs point to unlikely as Warren's husband Bruce Mann can be seen trying to pry bits of burrito and wrapping out of his mouth.

Many of Warren's supporters took to Twitter to share their support of Bailey and his decision to "eat his feelings," as one social media user put it. Another wrote, "Bailey, good boy! I'm eating my feelings too. @ewarren thank you."

As for Warren's response, she totally understood her dog. She told MSNBC's Rachel Maddow in a Thursday interview that Bailey was just "stress eating."

"He just said the pressure of First Dog had finally gotten to him. It was just stress-eating," she said. "He is a dog who stands up and says: 'I’m not waiting for someone to offer, I see what I wanted, I go straight after.'"

Warren's presidential campaign may have come to an end, but she told reporters on Thursday that she is nowhere near finished: "I guarantee I will stay in the fight for the hardworking folks across the country who have gotten the short end of the stick over and over."

She will keep on fighting, and Bailey will keep on eating. We all have our roles in this world, I'm glad Bailey found his. Keep eating those burritos, good boy.