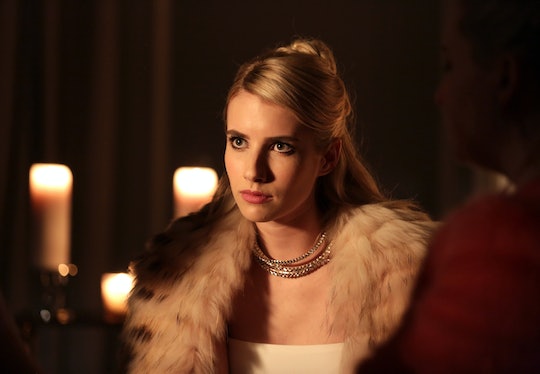 After finding out that several of her cast mates from Scream Queens were all having babies so close together, Emma Roberts joked that her pregnancy is like "witchcraft." Oh yes, and all of their babies are boys. This does sound a bit like witchcraft...

The Holidate actress announced in August that she and her boyfriend, Friday Night Lights actor Garrett Hedlund, are expecting their first baby, a little boy, together via Instagram. "Me...and my two favorite guys," she captioned a cute bump photo.

During a recent interview on Sirius XM's The Jess Cagle Show, Roberts offered up a theory about this adorably phenomenon: Witchcraft. "It's pure witchcraft," she said. "I don't know how else to explain it. It was not planned."

She went on to say that she was "glad" everyone was having boys for a Scream Queens-related reason. "We couldn't have planned it better, honestly. I'm glad they're boys. I would be scared if we all had girls — it would be mini–Scream Queens. I don't think the world's ready for that."

Roberts went on to add that, just because the women were all expecting boys, that didn't necessarily mean they couldn't be scream queens themselves. "So I'm grateful that we were all given boys, although who knows, they could be scream queens. We don't know yet," she said.

Certainly Michele seems to be hoping the three women will enjoy being "boy moms" together as she wrote on Roberts' pregnancy announcement on Instagram, "You will be the greatest mama. I love you Em! Boy moms together."

When Lourd announced the arrival of Fisher, Roberts wrote her a message of support that read, "Screaming!!! Love you guys so much."

Their pregnancies could well be the stuff of witchcraft, as Roberts said, but their support of one another as expectant and new moms is pure queen energy. Scream or otherwise.