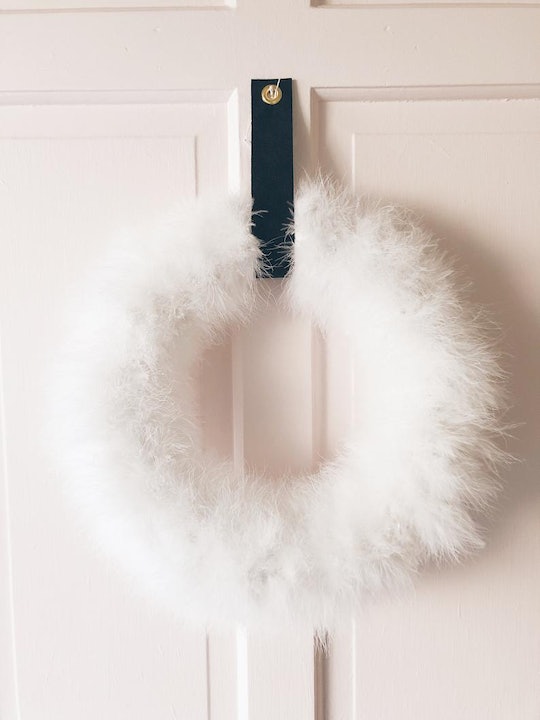 When you think of holiday colors, what comes to mind? Red and green, I bet. Maybe even silver and gold, just like the classic Burl Ives song. Well, this feather wreath from Etsy will have you rethinking your whole stance on how wreaths are supposed to look, and maybe what the entire holiday season is supposed to look like.

Wreaths are truly a symbol of the season. Wreathmaking began back in the 16th century, Time reported, when people living in northern and eastern Europe would bring evergreens inside during the colder winter months. As the plants were pruned, the excess greenery was then transformed into wreaths. And as far as traditional wreaths go, they’re usually made from leaves and flowers, SF Gate explained, and are twirled into a ring. They might be made from evergreens, like holly, boxwood, pine, cedar, and English ivy. The wreaths tend to get fancier as they go, adorned with ribbons, ornaments, and other decorations.

And that’s what sets this 17-inch feathered wreath ($62) apart from the rest. White can be a Christmas trend, Elle Décor reported. Red and green are still the beloved colors of the holiday, reported Business Insider, but this year, with unicorn-themed everything taking over, sparkly white holographic holiday decorations are definitely more of a thing than ever. And instead of being hung by more feathers, it’s being secured in place with leather, which is an interesting feature in and of itself. You don’t often find fluffy feather wreaths, and that’s what makes this one so intriguing. I mean, you wouldn’t necessarily want to rub your face against a prickly, pine wreath with ornaments attached to it. But this one? It’s begging to be stroked. (Come on, you know you thought about it, too.) And because it doesn’t boast a busy design, it somehow makes it more special.

That said, it’s super white. Which means that the chances of it getting dirty are probably faster than a green and red wreath (which could hide the dust better). Most likely, using a simple duster can eliminate most particles in the air and keep it bright white, but I wouldn’t dare toss this treasure into the washing machine for fear of matting it. It probably would also need to be hung high up, so that grubby little hands wouldn’t destroy it. And ditto for hanging it on your doorstep; after all, you wouldn’t want to expose it to the elements, so placing it on an inside door where it would safe from the cold or other unfavorable weather conditions would be your best bet.

Ideally, your holiday should be meaningful to you, Huff Post reported, and that includes the ornaments you use to decorate your home. It might be an honored heirloom passed down to you by a much-loved grandparent, or a Baby’s First Christmas ornament that you lovingly put on the tree each and every year — despite the fact that your “baby” is now in her double digits.

I think that it’s the simplicity of this feathered wreath that truly gets our attention. There’s nothing fancy about it, and perhaps that’s what makes it all the more charming and beautiful. Maybe it isn’t about all the bells and whistles, or the hustle and bustle of the holiday season. Maybe it’s just the symbolism of the wreath itself and how its circular shape represents eternity, serving as a visual reminder to be more present and value the simpler things in life... Black Friday doorbuster deals be damned.