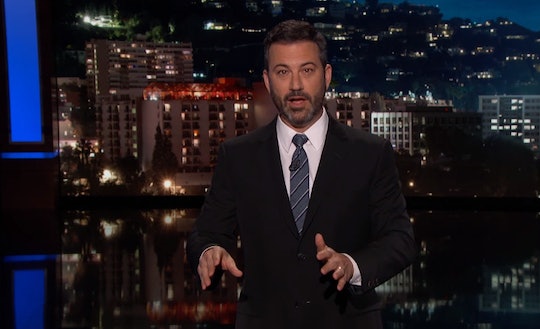 There's no rest for the wicked, it seems. Despite multiple defeats, the GOP is once again trying to repeal the Affordable Care Act, the landmark Obama-era legislation that extended health care coverage to millions of people. And the latest Senate version of Trumpcare seems to be far worst than any prior iteration. Not sure how? That's why every parent needs to hear Jimmy Kimmel's passionate words about the Graham-Cassidy bill.

Kimmel said of the bill during his monologue, according to Time,

Healthcare is complicated, it’s boring — I don’t want to talk about it — the details are confusing, and that’s what these guys are relying on. We are all just looking at our Instagram accounts liking things, when they are voting on whether people can afford to keep their children alive or not. We can’t let them do this to our children, our senior citizens, our veterans, or to any of us.

This is not the first time Kimmel has spoken out against conservative efforts to repeal and replace the ACA. In May, the comedian joined the healthcare debate when he gave an emotional speech about his son's heart condition on an episode of Jimmy Kimmel Live!

During his monologue, Kimmel recalled how his son William needed heart surgery for pulmonary atresia, a congenital heart defect, shortly after he was born on April 21. He took the time to thank the doctors and nurses who saved William's life, then took a moment to address the Trump administration's health care proposal, which — just like the Graham-Cassidy amendment — would have devastated medical coverage for millions of people, including children with heart conditions.

According to USA Today, Kimmel called out in May President Donald Trump's proposed $6 billion funding cut to the National Institutes of Health, which, if held up, would have negatively impacted places like the Children Hospital of Los Angeles, where William was treated. Kimmel said in his monologue at the time,

If your baby is going to die and it doesn't have to, it shouldn't matter how much money you make. I think that's something, whether you're a Republican or a Democrat or something else, we all agree on that.

Kimmel's May monologue led Sen. Bill Cassidy of Lousiana, one of the amendment's sponsors, to come up with the "Jimmy Kimmel Test," according to CNN. And the test is simple: "No family should be denied medical care, emergency or otherwise because they can't afford it."

Cassidy appeared on Kimmel's show shortly after the May episode and agreed to the "Jimmy Kimmel Test" — a point the talk show host brought up Tuesday night. But, Kimmel added Tuesday night, the Graham-Cassidy bill in no way holds up to the tenets of that so-called test. To recap, in May, Cassidy answered "yup" to Kimmel's question — if whether or not he believed everyone should have health care access despite their ability to pay. But, Kimmel noted Tuesday night,

"Yup" is Washington for "nope," I guess.

According to Vox, the Graham-Cassidy amendment would no only strip millions in funds from health care, it would also force densely-populated states to fork over significantly more money if they want to keep ACA, while less-populated states reap the benefits of a complex spending formula. The bill would also allow insurers to stop covering services guaranteed by the ACA, such as maternity care, and cause premiums for people with pre-existing conditions to skyrocket. In every way, the Graham-Cassidy amendment is far worse than any other iteration of Trumpcare.

But the question remains: Will this version die like the rest?