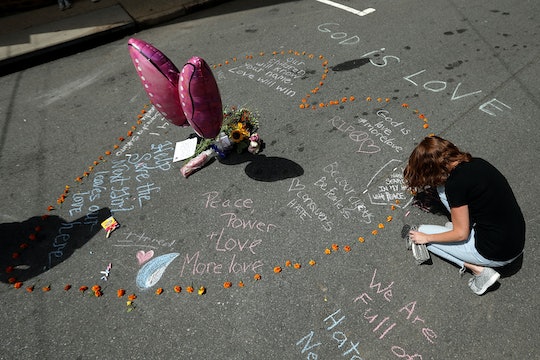 Everything You Need To Know About Antifa (& What You Shouldn't Believe)

This weekend's white nationalist rally in Charlottesville, Virginia devolved into a bloody, hate-filled event that claimed the life of one counter-protester and injured several others. Politicians and activists quickly denounced white supremacy in the wake of the brutality driven by "alt-right" demonstrators. President Donald Trump, on the other hand, blamed the violence in Charlottesville on "many sides." Among those alleged "sides" is the antifa movement, made up of leftist activists fighting against authoritarian regimes. But what exactly is it? Here's everything you need to know about antifa, because conservatives are spreading false messages.

When Trump first addressed the violence in Charlottesville on Saturday, he failed to call out white nationalism and neo-Nazism by name. This lack of specificity drew rightful ire from lawmakers and the public alike; by blaming "many sides," the president also accused anti-fascist counter-protesters of playing a role in a deliberate act of violence committed by a white nationalist. According to the New York Times, the harsh criticism caused Trump to clarify his remarks in a terse press conference in which he doubled down on his "many sides" position.

Specifically, in a heated argument with a journalist, Trump blamed the "alt-left," a made-up term to describe the antifa movement and, more broadly, anti-Trump activists. Conservatives tend to use "alt-left" to conjure up images of a radical progressive movement that's against American ideals. But that's furthest from the truth.

The mission is right there in the name: Antifa stands for antifascism. Antifa activists want to dismantle or disrupt radical authoritarian regimes that seek to oppress populations and suppress resistance through violence. Although antifa has a long political history, the American faction of the movement has seen a sharp rise in recent years, particularly in the days since Trump was elected to office. Mic has put together a succinct timeline of antifa activism that has taken place within the last few months.

Antifa Traces Its Roots Back To 1930s Germany

People may treat antifa as a new movement, but that's erasing the movement's history. According to Jacobin, antifa was born out of Germany's socialist labor movement. It started taking shape during the early years of Hitler's rise, but began to swell after World War II. And antifa ideology wasn't isolated to Germany: In 1947, the then-U.S. War Department rereleased the antifascist short film, Don't Be A Sucker. It's a 17-minute public service announcement warning Americans to not give into racism and prejudice, lest they want the United States to turn into Nazi Germany. A clip of the film circulated over the weekend, drawing parallels to the white nationalist-driven violence in Charlottesville and, more broadly, the rise of Trump's America.

Antifa Is Not Equal To White Nationalism Or Neo-Nazism

Trump's "alt-left" comment attempted to equate antifa with white nationalism and, within that, American neo-Nazism. But that's a logical fallacy that political pundits theorize is influenced by White House Chief Strategist Steve Bannon, who has been lauded by white nationalist leader David Duke. As the Atlantic reported, antifa, unlike white nationalism or neo-Nazism, doesn't believe that one race or religion is superior above all else. Nor do antifa activists believe in a totalitarian one-party government — an important facet of conservative, white nationalist ideology. There's an argument to be made about tactics, but it's important to remember that antifa is and has always been a reaction to an oppressive, violent system that propagates and celebrates genocide and slavery. So don't let conservatives' indiscriminate use of the term fool you: Antifa is the antithesis to white nationalism and Nazism, not its equivalent.

Antifa Activists Are Not "More Dangerous" Than White Nationalists

Direct action has been a cornerstone of antifa ideology. That means, as antifa organizer Scott Crow told CNN, activists "go where they (right-wingers) go." That means if white nationalists are organizing a rally, as they had in Charlottesville, you could expect to see antifa members show up to counter-protest. Crow continued,

And so we go to cause conflict, to shut them down where they are, because we don't believe that Nazis or fascists of any stripe should have a mouthpiece.

That counter-protesting sometimes includes property damage and destruction. What antifa disruption does not include is barreling your car into a crowd of people exercising their First Amendment right. But that's exactly what white nationalist James Fields Jr. of Ohio allegedly did in Charlottesville; Fields has been charged, among other counts, with second degree murder in the death of Heather Heyer, a 32-year-old paralegal who was killed in the attack. (Romper reached out to Fields' attorney, Charles Weber, but has yet to hear back.) You also have white nationalist sympathizers Jeremy Joseph Christian, James Harris Jackson, and Sean Urbanski, all of whom have been indicted on charges of killing people in what have been considered hate-filled attacks.

Then there's the matter of basic tenets: Antifa activists believe in stopping or tearing down dictatorships and oppressive, anti-democratic systems. White nationalists and neo-Nazis, on the other hand, believe in one superior race, one superior religion that rules above all.

America, if you remember, literally helped fight a war against the latter.