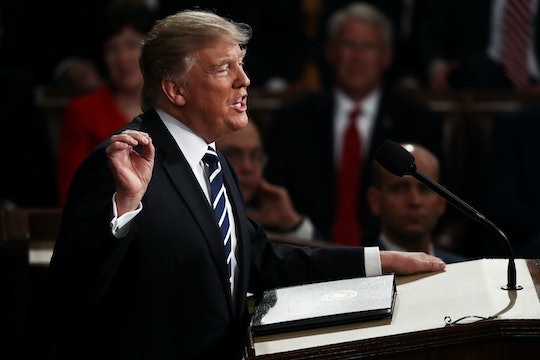 On Tuesday night, President Trump addressed a joint session of Congress for the first time. If you missed it, all you need to get the gist of the speech are these funny tweets about Trump's State of Union-esque address. Every president is subject to some minor hazing on social media when they get on national television to address the country. (Barack Obama, I'm looking at you and that awful beige suit.) But Trump inspires an entirely different level of humor on social media. Yes, there are some people who are just downright mean about anything the man has to say (just like any other internet troll out there), but Trump has also inspired plenty of hilarious hot-takes and memes, as anyone who's been paying attention knows.

Whether you're into his policies or not, Trump has had some very memorable moments while publicly speaking. And in a world where everything becomes a meme eventually, that leads to a lot of people making a lot of jokes. Like, remember when he brought his steaks with him to a campaign rally? And then he brought stacks of papers to his first post-election press conference to prove that he would divest himself from his businesses? This is all the foundation for high quality snark on social media, politics aside.

On Tuesday night, unsurprisingly, Twitter was once again on fire.

Not only does Trump go hard with props, he's also had more than a few, well, awkward moments, to say the least. Many of the funny tweets during Trump's address focused on his inability to state facts without exaggerating them (or, in the worst cases, just making things up, whether they'r fake terrorist attacks in Sweden or incomprehensible words like "bigly." Or is it big league? America will never know).

Trump's address focused mainly on the work he has done since taking over office and what he has in store for the country going forward. As Trump does, much of the speech was one big pat on the back for things he's accomplished in the White House, and also things that he thinks he's accomplished, as some Twitter jokesters were quick to point out.

Trump also discussed his plans for repealing the Affordable Care Act. "Why not get the job done right," he said, when discussing healthcare. He asked Congress to unite on healthcare and paid family leave initiatives. Just after that, he also asked Congress to address clean air and cooperate on child care. Hey, Trump is never easy to follow. If anything, the commentary on social media was all about how hard it is to understand the president.

For some people, humor is the best way to cope with the stress that politics gives them. And when you give Twitter users a Trump "State of the Union?" It's a recipe for some very good comedy.