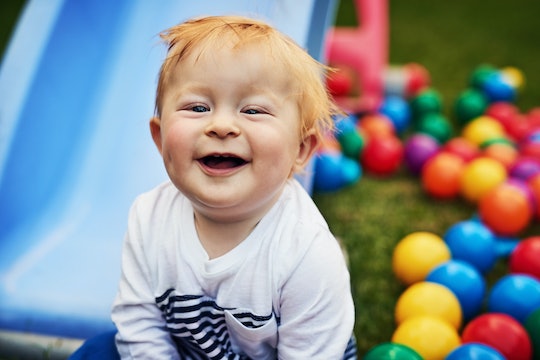 For the most part, Apple has been pretty awesome in its efforts towards inclusivity and diversity. In its last update, 398 new emojis were introduced with a strong focus towards representing folks from all walks of life. Case in point: There were emojis ranging from gender neutral icons to disability-related emojis such as a hearing aid, service dogs, and wheelchairs. But there’s one icon that is still missing — the ginger baby emoji, and parents of these precious babies are seeing red.

Interestingly enough, redheads weren’t even included in the emoji keyboard until 2018. In celebration of World Emoji Day, auburn emojis were included, according to The Sun — along with things like cupcakes and mangoes. So it’s even stranger that both male and female redheaded emojis were added on, but there’s nary a cute carrot top baby in sight.

Why is there a lack of emoji love for the redheaded population? Well, it might have something to do with the fact that redheads are so utterly rare. In fact, only about 2% of the population actually have red tresses, Live Science reports. And in order for you to give birth to a redhead, your baby needs to have two copies of the red hair gene MC1R, which is recessive. But even if both you and your partner sport red hair, only one in four of your children will also be redheaded. It’s that uncommon.

That still doesn’t mean that redheaded babies shouldn’t be represented by an emoji. In fact, plenty of parents have taken to Twitter to share their displeasure for the lack of redheaded baby representation. Some have even gone so far as to post pics of their babies as a way of enticing Apple to offer the sought-after emoji.

This Twitter user is using the lack of redhead baby emojis to explain why she hasn’t had a baby yet.

And you know it’s getting serious when the hashtag #gingerlivesmatter starts appearing on Twitter.

And if there were ever a reason for Apple to release a ginger baby emoji, this is it. Oh. My. Goodness.

All we can say is Apple, there are some gorgeous redheaded babies out there with proud parents who are desperate to use an emoji. Hopefully in the next update we can really start seeing some red.