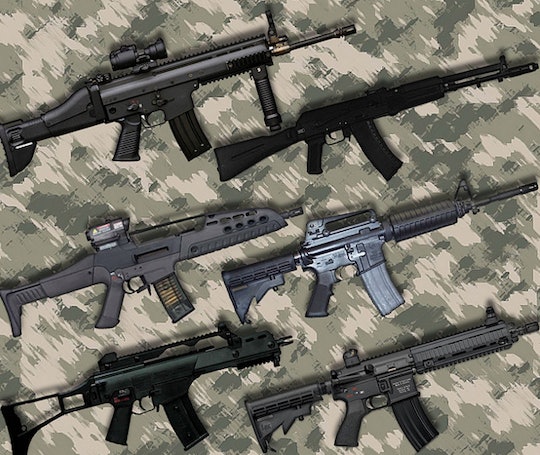 Guns Used In San Bernardino Shooting Were Legally Purchased, So There You Have It

At a 9 p.m. PT press conference Wednesday San Bernardino law enforcement officials relayed more details on Wednesday's horrific shooting, including the fact that the San Bernardino suspects used legally purchased guns to commit the mass shooting. The Bureau of Alcohol, Tobacco, Firearms and Explosives (ATF) confirmed to CNN that not only were two guns used in the mass shooting legally obtained, but that "one of the guns used in the shooting was legally purchased and traces back to someone believed to be connected with the shooting."

At this time, two suspects are associated with the shooting, Syed Farook and Tashfeen Melik, a woman. Authorities confirmed that both died in the chase and shoot-out with police that followed the shooting at the Inland Regional Center in San Bernardino Wednesday morning. The ATF would not disclose the name of the firearm purchaser. Still, whether Farook and Melik legally obtained the guns themselves or got else (the detained third suspect?) to legally acquire the deadly weapons, the fact remains that gun control screening is not properly vetting candidates who want to purchase firearms.

As investigators collect bullet casings, the other two weapons are still in the process of being identified, but one thing is already clear. We are a nation that is killing itself.

How many more mass shootings must occur before Congress can enact stricter gun restriction laws? A mass shooting occurs when more than four people die including the shooter in a single incident.

2015 is breaking records for mass shootings, with San Bernardino marking the 355th. As The Washington Post's Christopher Ingraham points out, in the wake of the Colorado Springs Planned Parenthood shooting last week, Obama encouraged U.S. citizens not to let mass violence "'become normal.'" However, you have to wonder, given that employees of the Inland Regional Center in San Bernardino were trained on how to react if a shooter entered the premises, haven't mass shootings already become a "normal" phenomenon? Unfortunately, knowing how to protect yourself in a mass shooting did not help the people in the auditorium, where the attacks took place.

Legislation to vet people properly to keep guns out of the hands of those willing to commit mass shootings is the one chance we have to quell the madness.

But Congress obviously isn't going to make that change without some substantial nudging. To take action, write to your legislators and ask for tougher gun laws. So much depends on it.