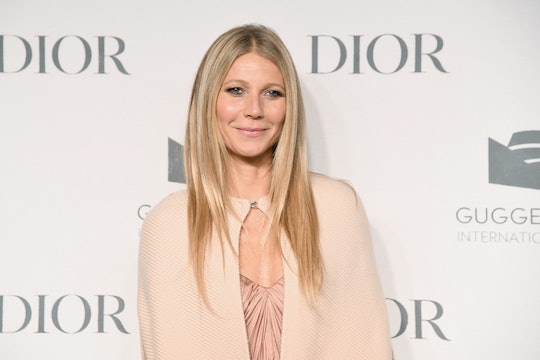 Gwyneth Paltrow's Birthday Photo With Her Mom & Daughter Is Too Lovely

Gwyneth Paltrow is one of those women who seems to exist in her own stratosphere, doesn't she? Sort of otherworldly in a way that almost feels as though she belongs in a category all alone. Except that's not actually the case, of course. Paltrow is a friend and a wife, a mom and a daughter. And Gwyneth Paltrow's birthday photo with her mom and daughter is a gorgeous example of the fact that she is part of something bigger than herself. A family... with incredibly amazing genes.

As any good Goop fan knows, Paltrow is the daughter of (in my opinion, seriously underrated) actress Blythe Danner and the late television director Bruce Paltrow. She is also mom to two kids with ex-husband Chris Martin of Coldplay, 15-year-old daughter Apple and 13-year-old Moses. On Friday Paltrow turned 47, and to celebrate this momentous occasion her friend, Vanity Fair's Derek Blasberg, took to Instagram to share a super rare photo of the three generations of women in a casual photo. As he captioned the sweet snap, "Today is the middle one's birthday, but let’s celebrate the entire Danner-Paltrow-Martin bloodline. Here are three kind, talented, sweet, lithe (rhymes with Blythe!), wonderful women. The apple doesn't fall from the tree—and neither does Apple. Wishing you the absolute bestest year ever."

The three women don't just look totally beautiful (and let's all take a moment to appreciate the fact that Apple looks almost exactly like her mom), they look content. Happy to be spending some time together. Also I'm pretty sure I see a 90's-era scrunchie on Paltrow's wrist and this brings me joy.

Paltrow is clearly enjoying this stage of her life, as her children are just starting to become people in their own rights. Although that doesn't mean they're perfect, of course. As The Politician actress told Savannah Guthrie in a recent interview at the Emmys, life with two teens can get pretty interesting, as per Cosmopolitan:

They’re really coming into themselves. They’re hilarious. They’re smart. They can talk. They can sort of muse about things—it’s the greatest. Yeah, they can be kind of, you know, dicks once in a while.

This is sort of the way it goes with kids, right? They get bigger and more interesting and independent but they also get more opinionated. That's the way that the world goes around, I guess. And do you know who probably understands this all too well? Blythe Danner, who spoke to Paltrow on her weekly Goop podcast in 2018 about what it was like raising her to be a strong-willed person, as per People:

I think you came into the world with a very strong self-image. I couldn’t harm that. I may have tried, I may have tried to sway you to be more conforming to what I thought was the proper young girl. You were a rebel from the beginning. You had a strength and you knew who you were and I should have been wise enough and that is what still bothers me is that I didn’t have the wisdom to observe, to know that you were this creature unlike anything.

This picture of three generations of women is proof that they are all creatures unlike anything. And what a thing to celebrate.