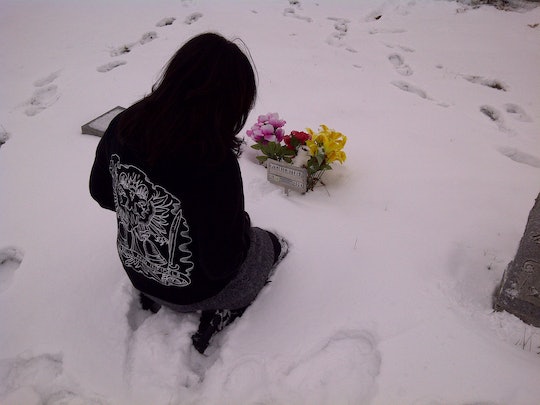 Here's How I Celebrate My Dad On Mother's Day

There are a few days, every year, that make me immediately think of my father. My birthday. My dad's birthday. The anniversary of his death. Father's Day. And, yes, even Mother's Day. While I adore my mother and make sure I take time to celebrate her on the one day a year we're all encouraged to thank our moms for the work they do, how I celebrate my dad on Mother's Day is just as important to me. In the end, it's another day that gives me a chance to hold my dad just a little bit closer.

To be honest, I'm afraid I will forget about the man who was taken from me way too soon. The longer he's gone, and the older I get, the more Mother's Day becomes something different than what was arguably intended. Because on Mother's Day, and as another year passes and I'm forced to come to terms with how quickly my own children are growing up, I can't help but feel like a little kid yearning for her father. The same kid who was raised by a hard-working single mother after she divorced that father. The same kid who had a step-dad she called "dad" and who helped raise her. The same kid that went looking for her father years later, only to find out it was too late and he was already gone.

He might have missed out then, and he might be gone now, but I can still find ways to incorporate him into my life and the lives of my children.

My biological father wasn't allowed to be in my life, so I didn't have what one would consider a relationship with him. And when I was pregnant with my son and tried to start one 14 years ago, I found out he had passed away from cancer. So now all I am left with is a few fond memories, the majority of which involve his laugh and how he looked at me with such admiration. I ended up naming my son after my father as not only a tribute, but a way to keep the man who felt allusive for so long apart of my life.

So every year, on a few particular days, I look back and take stock of all my father missed. He wasn't around for my first marriage, my divorce, my second marriage, the birth of either one of my children, and every other signifiant day in my life. But I don't think it has to be that way. He might have missed out then, and he might be gone now, but I can still find ways to incorporate him into my life and the lives of my children. I can still work on having something that resembles a relationship with him, even if it's only in our memories.

I tell my children about the grandfather they will never meet, so they can better understand the mom I am today.

I've done many different things to celebrate my dad on Mother's Days in the past, and each way has helped me feel closer to him. It can be simple, like when I think of him when I'm sending my mother a card of gratitude. It can be a visit to his gravestone; a quiet, reverent moment shared between father and daughter. I have also spent time with his mother — a woman I also know little about — trying to piece together my Puerto Rican heritage and how much of my father I have in me. And I've sat and talked about my father with my mom, trying to better understand what kind of man he is and what he would be doing if he was still alive.

While others are enjoying all-you-can-eat buffets, or planting the bouquet of flowers their children gave them, Mother's Day, for me, is spent reflecting over, and talking to, the handful of pictures I have of my father. I tell my children about the grandfather they will never meet, so they can better understand the mom I am today.

Because if Mother's Day is truly about celebrating moms, then I think it should also be about celebrating and remembering the people that made us the moms we are. I don't know much about my father, and he wasn't around as often as he arguably should have been, but he is half of me. I think allowing myself to forget him would only make it harder for me to truly understand who I am and who I want to be. By embracing the memories of my father, I can keep looking forward to the future, and keep working on being the mom I want to be.

The one my children deserve.