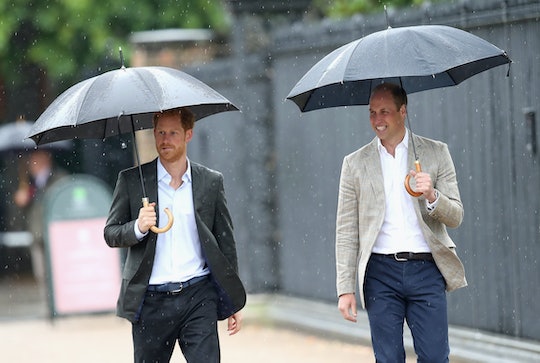 It has been 22 years since Princess Diana died. The world has changed enormously in those two decades (the internet is now a thing, for instance) and her family has changed so much as well. Her ex-husband Prince Charles married Camilla Parker Bowles, and both of her sons have grown into men. With wives and children and passions of their own. But on the anniversary of Princess Diana's death, Prince William and Prince Harry reportedly have a time-honored tradition of keeping their mother in their hearts. Because time might have marched on without her but they are not in the business of forgetting the woman who shaped them.

Princess Diana was just 36 years old when she died from injuries suffered in a car crash in Paris, France in August 1997. Prince William was 15 years old at the time, Prince Harry just a 12-year-old boy himself. There is never a good time to lose your mom, but I think 12 and 15 are especially difficult. Not to mention the fact that the boys were expected to grieve for their mother so publicly, walking behind her casket in her funeral procession from Buckingham Palace alongside their father Prince Charles and Princess Diana's brother, Earl Spencer. In 2017 Prince Harry recalled the horror of that moment, telling Newsweek in an interview, "My mother had just died, and I had to walk a long way behind her coffin, surrounded by thousands of people watching me while millions more did on television. I don’t think any child should be asked to do that, under any circumstances."

Now that both Prince William and Prince Harry are fathers themselves, they honor their mother's memory by shielding their children from being exploited in such a terrible way. Prince William's three children with Kate Middleton, 6-year-old Prince George, 4-year-old Princess Charlotte, and 1-year-old Prince Louis are kept out of the public eye as much as possible, according to the UK news website Express, as is Prince Harry's baby boy Archie with wife Meghan Markle. And while both men appear to be devoted fathers, on the anniversary of their mother's death they are merely Diana's sons. The two men reportedly spend the day together at Kensington Palace going over old photos and reliving memories with their mother over lunch or dinner, as a palace insider told MSN:

They talk about the little things about Diana that made them laugh: the ski trips and outings to Thorpe Park [a British amusement park]; the effort she went to on their birthdays — all of it.

Their wives and children apparently join them later in the day to be a part of the special remembrance. A private remembrance, it's important to note. The rest of the world might share in Prince William and Prince Harry's grief at the loss of Princess Diana, a humanitarian and passionate philanthropist, but it's simply not the same. For those two men, they mourn the loss of their mother, not a famous public figure.

And after what they went through at her funeral, it seems perfectly appropriate for them to mourn in private. Together.