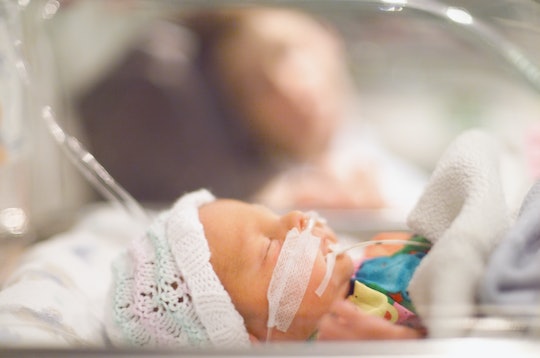 When my son was born about a month ago, I spent a few days in the neonatal intensive care unite (NICU) holding him as much as I could and peeking at the other NICU babies every time I snuck out to go to the bathroom. So many of those precious newborns were sleeping peacefully on their own, in their little pods, for hours a day. It made me wonder, do premature babies need to be held more? As it turns out, maybe all babies, either premature or those born full-term, need to be held more.

My son, thankfully, was born only two weeks early and was just being held in the NIC so doctors and nurses could monitor and observe his glucose levels before he was discharged, so I was able to hold him as much as I wanted to. In other situations, though, it's more difficult for babies to be held all the time, by either their parents, volunteers, or nurses, because they're not as healthy and they have more equipment attached to them. While I was there, in the NICU and surrounded by babies receiving essential care, I did wonder how beneficial it is for premature babies to be held. I mean, they all seemed perfectly content, and honestly tired and zonked out, in their pods, all on their own.

Whether babies need to be held for significant periods of time has long been a question that parenting experts and researchers have opinionated about. In the early 20th century, it was thought that holding babies too much would lead them to become spoiled and rotten children, according to Parents, so babies were only to be kissed once a day at the most. Now, most NICUs and hospitals preach that "kangaroo care," which, according to BabyCenter, is defined as holding your baby skin-to-skin, helps babies regulate their heart rates, improve their immunity, and regulate their body temperature, among other benefits.

According to Parents, "Physiology and research provide overwhelming evidence that Kangaroo Mother Care is not only safe but superior to the use of technology such as incubators." Additionally, the site explains further, saying, "Depriving babies of skin-to-skin makes alternative stress pathways in the brain, which can lead to attention deficit disorder (ADD), colic, sleep disorders, among other things."

When kangaroo care was practiced in hospital NICUs, researchers began to notice that the babies being held were outperforming babies who weren't held at all, especially in hospitals where standard protocol was to keep babies from being held for fear they would come into contact with potentially life-threatening germs. TIME reported on a study done in Israel, nearly two decades ago and where researchers introduced kangaroo care to a NICU for the first time, which took note of the effects holding premature babies had over months and years. The study published the following remarks:

"As babies, they had more-organized — or predictable — sleep patterns; steadier respiration and heart rates; and better affective attention — or the ability to direct their gaze and actions toward a goal."

Clearly, there are benefits for premature babies being held by their parents, nurses, volunteers, and/or caregivers as much and as often as possible, and those benefits seem to extend to all babies that are born at full-term, too. So pick that baby up and get a cuddle, ASAP! (After securing the OK from your baby's team of doctors, nurses, and specialists, of course.)