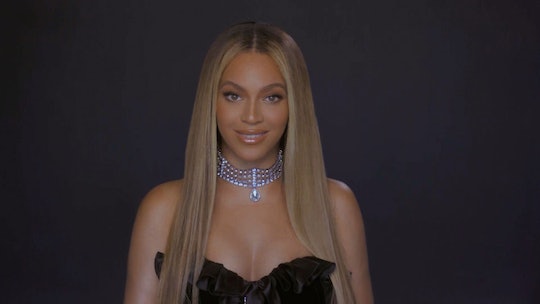 Beyonce's 'Black Is King' Special, Based On Her Music From 'Lion King,' Will Be On Disney+ So Soon

As if you didn't have enough reasons to look forward to July, Beyoncé's new special on Disney+ will be available to stream on the platform at the end of the month. It's time to get very, very excited.

The film and visual album hybrid, formally titled Black Is King, will debut on Disney+ on Friday, July 31, according to Deadline. Beyoncé wrote, directed, produced, and stars in the film, which is based on the music from her 2019 album, The Lion King: The Gift. But this special won't just be about Beyoncé's incredible songs off of the album — it will tell a story, too. Black Is King reimagines the lessons from The Lion King but for today's kings and queens who are in search of their own crown, according to a release from Disney. The film will focus on one young king's journey through betrayal, love, and self-identity, as his ancestors help him reach his destiny and reclaim his throne. "Black Is King is an affirmation of a grand purpose, with lush visuals that celebrate Black resilience and culture," Disney said in a statement. "The film highlights the beauty of tradition and Black excellence."

The film, which has been in production for one year, has a cast and crew that represent diversity and connectivity, according to Disney, and will include some special guest appearances from the musicians featured on the album. Fingers crossed that Beyoncé's oldest daughter, Blue Ivy, will make an appearance, too. The trailer for Black Is King, which was released over this weekend, just hints at all of the greatness that is to come.

Beyoncé released The Lion King: The Gift last year, according to People, to accompany the release of the live-action remake of The Lion King, which she also starred in as Nala. "This soundtrack is a love letter to Africa, and I just wanted to make sure we found the best talent from Africa, and not just use some of the sounds and did my interpretation of it," Beyoncé told ABC News at the time. "I wanted it to be authentic to what is beautiful about the music in Africa."

But the only way you'll be able to watch Black Is King is if you subscribe to Disney's streaming service for $6.99 a month, where you will have access to Disney's extensive collection of movies and TV shows. Disney+ is no longer offering a free trial to test out the service, according to The Verge, so you will have to pay if you want to watch it.

Beyoncé's third visual album will debut on Disney+ on July 31. But in the meantime, you can revisit Beyoncé's starring role in the 2019 live-action version of The Lion King and the original 1994 animated classic, which are both streaming on Disney+ right now.