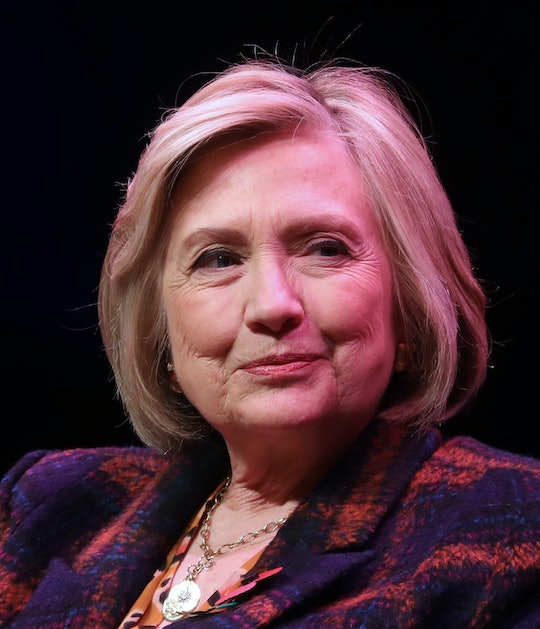 Turns out, the woman who brought pantsuits back is indeed a hugger. In fact, former Democratic presidential candidate Hillary Clinton said she wanted to hug Meghan Markle, while expressing her support for the Duchess of Sussex in an interview with BBC Radio 5 Live on Tuesday. Markle, who has faced heavy criticism since her relationship with Prince Harry first came to light in 2016, recently opened up about her struggles with being in the public eye as a new mother.

"I feel as a mother, I just want to put my arms around her," Clinton told BBC Radio 5 Live's Emma Barnett of Markle. "Oh my God, I want to hug her. I want to tell her to hang in there, don't let those bad guys get you down, keep going, do what you think is right."

Markle recently spoke candidly about the challenges she's faced starting a family while facing significant scrutiny from the British press. While discussing her experience with living in the spotlight while pregnant and as a new mom with ITV News at Ten anchor Tom Bradby for the ITV/ABC documentary Harry & Meghan: An African Journey, Markle revealed that few had asked after her well-being.

"Look, any woman, especially when they're pregnant, you're really vulnerable, and so that was made really challenging," Markle told Bradby. "And then when you have a newborn, you know. And especially as a woman, it's a lot. You add this on top of just trying to be a new mom or trying to be a newlywed... not many people have asked if I’m OK, but it's a very real thing to be going through behind the scenes."

Clinton, who has certainly faced her own share of critical and invasive media coverage over the years, said she thought what Markle was going through was tough. "It takes some getting used to to have your every move scrutinized and analyzed and, frankly, things made up about [you]," Clinton said. If anyone might understand the frustrations of having your every move scrutinized, it's Clinton. While serving as first lady of the United States from 1993 to 2001, for example, Clinton's marriage and personal life were heavily scrutinized, as the Washington Post reported. As were the details surrounding her family's move out of the White House, according to the L.A. Times. Clinton continued to face media scrutiny while serving as a U.S. senator, during her tenure as secretary of state, and as the Democratic presidential nominee in 2016.

"It's not easy and there are some techniques that can be learned along the way — some humor, some deflection, which I'm sure she will come to," Clinton said of enduring such public criticism. "It is tough what she is going through and I think she deserves a lot better." She said she felt Markle was "an amazing young woman" who had "an incredible life story."

Clinton went on to claim that Markle's race and gender "absolutely" played a part in some of the negative coverage the Duchess of Sussex has received since her relationship with Prince Harry was first made public. "I don't think there's any doubt of it," Clinton told BBC Radio 5 Live. "I think even if you go back and look at social media from the time the engagement was announced, race was clearly an element in it." The former U.S. Secretary of State also said it was "heartbreaking and wrong" that some of Britain's mainstream media printed criticisms of Markle that were tinged with racial overtones.

"You known, people don't choose who they fall in love with, they fall in love," Clinton said. "Everybody should be celebrating that because it's a true love story. You can just look at them and see that."

Because it's hard to hug across the pond, Clinton said she wished Markle and Prince Harry the best. "They are struggling to have a life of meaning and integrity on their own terms," she said of the couple. "That's hard enough if you're just walking around in today's world but if you're on that big a platform, it's really difficult."