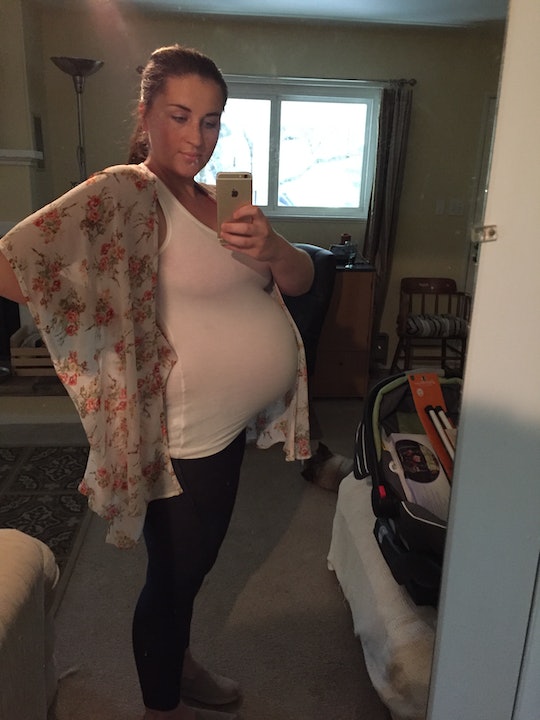 Honestly, I Was Embarrassed To Admit I Was Pregnant

I think it’s pretty typical nowadays to celebrate the fact that you're not pregnant. Seeing that single pink line, or negative sign, frowning face, or whatever sign or symbol may indicate life has thrown you a free pass from growing a human this month is usually cause for celebration! Let’s get mimosas; I’m safe for the month! But what about when you do see the plus sign, or two pink lines, or that damn smug smiley face, and you're not ecstatic about it? Then what? When I found I was pregnant, I was completely ashamed. I got pregnant when I was 22, just shy of finishing my last year of college.

My pregnancy came during my senior year of college, right when I was also in the midst of breaking up with my boyfriend for the second time. I was also on birth control, and naively thought that because I was taking the Pill, I was somehow immune to the antibiotics I was taking. (For the record, the antibiotics did, in my case, ruin the efficacy of the Pill.) I was in no way mentally, emotionally, or financially prepared to have a child. But there I was: 22 and pregnant. When that second pink line, which might I add was cruelly faint, showed up on three separate tests, I still dragged myself into Urgent Care to get the official, “Congratulations, you’re pregnant.” Most people would be jumping for joy, but I was completely ashamed.

I figured they'd all be thinking, You’re too young, you’ll fail. And at the time, I believed it too.

Anyone who knew me growing up would likely say that I was the absolute last person they would've expected to get pregnant at the age of 22. And this was the first thing I thought of when I found out that I, for sure, was pregnant. Were my friends and family going to believe me? Or would they think I was doing this pregnancy joke for the 1,000 time? I was also worried that after I'd convinced them that I really was pregnant, they were going to tell me that my life, which was just on the cusp of beginning, was now basically over.

Whenever I heard that someone in their teens or early 20s was pregnant, I felt like that was it; their life was over. Those young women were basically social pariahs, and any chance of them becoming successful was a serious long shot. And I know I'm not alone in thinking that. It's how society has often painted young pregnancies, and it's how my friends and I perceived young pregnancies as well. Ultimately, I felt like there was no way I could be pregnant and still be me, no way I could explain my pregnancy to my friends and family. I figured they'd all be thinking, You’re too young, you’ll fail. And at the time, I believed it too.

Another huge part of being embarrassed to admit I was pregnant was due to the fact that I was, yet again, in a terrible place in my relationship. I've been open about the fact that I'd dealt with an emotionally abusive partner, and when I found out I was expecting, I'd actually just broken up with him. I’ve never hidden the fact that I seriously considered an abortion when I first found out I was pregnant, but my partner at the time felt the opposite. And to this day, I am so glad I took the time to decide for myself whether or not I felt I could raise a child on my own. Leaving an emotionally abusive relationship isn't easy by any means, but I needed to know that if I was alone, that I could raise this baby. That I could give them the life I wanted — and the life they deserved.

Here I was, 22 and single, having a baby with a partner who had emotionally abused me.

When I felt that I would and I could give my baby everything they deserved, I made the decision to keep my son. It was a choice I’m glad I had the freedom to make. But even then, even when I knew I was ready to have this baby, that he was wanted, I was still afraid of what my family would think. Here I was, 22 and single, having a baby with a partner who had emotionally abused me.

In the end, I just started word-vomiting to anyone and everyone that I was pregnant. And the more I told people, the more I realized that I had nothing to worry about. The outpouring of love and support from the people who mattered most to me was overwhelming. I know their reactions could've been different, but I am so thankful that they supported and encouraged me. More than anything, they trusted me. I know deciding to have a child is not the choice for everyone, but it just so happened to be for me. And in the year since my son's birth, he's taught me more about myself and my inner strength as a woman and mother than I ever knew I was capable of possessing.

I was worried that becoming a young mom would put my life on hold and render my dreams and goals invalid. But in so many ways, I've succeeded because I am his mom.