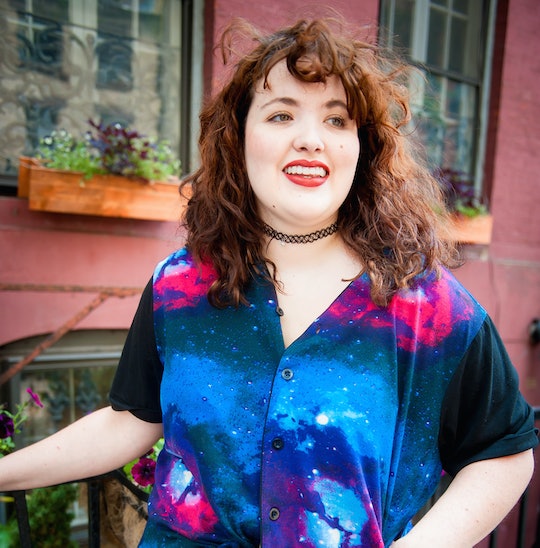 Honestly, I'm Not Sure I Want To Share Photos Of My Baby On Social Media

Almost overnight, my Instagram feed became covered in babies. Photos of friends and acquaintances at the club or selfie-ing it up in workplace bathrooms started being exchanged for ones of swaddle-blanket prints and seven-pound entities with rosy cheeks and smelly butts. And as quickly as they'd all appeared, I found myself enjoying each and every one. But I also found myself wondering how I would handle posting photos of my kids online should I ever reproduce.

Upon finding out that I would in fact be reproducing come the end of 2016, the question became all the more pressing. Although I hold zero judgment for overjoyed parents who can't help but share pic after pic of their toddlers on Instagram, I also haven't been able to shake the feeling that doing so might be a peculiar brand of privacy invasion: A reduction of my future daughter's autonomy, even if she won't be able to make these kinds of choices for herself for years to come. In many ways, it boils down to consent: Should I be posting pictures of my baby girl on the internet if she can't tell me if she's OK with that? Shouldn't I wait until she is of age to have an opinion, one way or the other?

I want her to understand that, as a girl, a lot of people will try to take those choices away. I also want her to feel confident in the knowledge that her parents would never do the same.

My career path only seems to complicate the choice to share or not to share further. As an internet writer who spends quite a bit of time posting photos of my own face and body for purposes of style blogging and fat acceptance work (and someone who is also a millennial), I've grown used to confessional-writing and confessional-living. There are few aspects of my life that don't get divulged to friends and followers on Twitter or Facebook. And, realistically, the human growing in my belly is going to be a pretty huge aspect of my life shortly.

I suppose it's the feminist parent in me who's unsure of how to handle this. I want my kid to know, beyond a doubt, that she's in control of her life and her choices as she ages. I want her to understand that, as a girl, a lot of people will try to take those choices away. I also want her to feel confident in the knowledge that her parents would never do the same.

It's not that I think sharing pictures of your kid is inherently anti-feminist by any means. It's more that I'm unsure of which choices are mine to make for her and which are not. Rationally, I know and accept that I'll be largely in control of her meal plan and hygiene for many years. I'll be the one calling the shots until she can dress herself. Indeed, there are plenty of things parents have to do for their offspring before said offspring can do these things for themselves. But most of those things are ultimately and unquestionably for the benefit of the kid. When it comes to posting photos of my daughter online, however, I wonder how that would truly benefit anyone but me.

Considering that my daughter will be of a post-internet generation, however, it's unlikely that she won't have some kind of web presence of her own come junior high or maybe even before. I'm sure new social media brands I can't even conceptualize will have come to exist by then, and I'll probably find her snapping selfies for her profile pics in the comfort of our bathroom.

Sure, there's a chance that she could be an extremely private individual, eschewing an online presence in exchange for a focus on face-to-face encounters and interactions. But when studies about Generation Z already reveal that "78 percent of [contemporary] teens now have a cell phone, and almost half (47 percent) of those own smartphones," according to the Pew Research Center, the chances that my kid won't be sharing photos of herself on some kind of electronic device come 2026 or so seem pretty minimal.

What I still want to know is whether the eventualities of her social-media life cancel out her right to decide which photos of herself go online and which don't before she's old enough for her first iPhone. Finding embarrassing pictures of myself in diapers or covered in numerous mushy foods online isn't something I'll ever have to deal with, given my pre-internet birth. But for post-internet babies, it's seemingly inescapable.

Concerns about privacy invasion and the potential for embarrassment aside, I know that it will be difficult to resist meshing two of my worlds: My online life and my soon-to-be mom life. I mean, this kid already owns more clothing that I do. I'm already looking forward to playing stylist until she puts an end to the practice. I already love her more than I thought I could love any one thing. Sharing images of her will probably come naturally — as would sharing images of the wonderful activists I just met, or the fabulous new outfit I just treated myself to, or the article that I'm feeling particularly proud of.

If I choose not to make her a part of my life online — if I choose to go about my job and my social spaces as though I hadn't had a child at all — how will she know what an invaluable part she plays in my narrative?

In this digital age of ours, the choice to live on or off the internet is no longer much of a choice at all. Through the internet, many of us communicate with our friends and family. We do our jobs. We do our homework. We self-educate. We read, we write, we share, we learn, we form community. It's true that I've chosen to be more active online than some, but I cannot fathom not being online at all. For my kid, who will never know a life without the internet, it'll likely be even more difficult to conceptualize an existence without Instagram self-portraits or Twitter notifications.

So although Snapchatting pictures of my future child might not seem to be benefitting her at all — instead merely appeasing my need for over-sharing and the world's needs for more pictures of babies in cute get-ups — perhaps there is more to it than that. Once my daughter is old enough to understand both my work and the role of the internet in it, she'll also probably begin to realize the importance I place on imagery. I'll be able to explain why I think being raw and open and honest online for strangers and friends alike can be so important, and how photography factors into all of that. But if I choose not to make her a part of my life online — if I choose to go about my job and my social spaces as though I hadn't had a child at all — how will she know what an invaluable part she plays in my narrative?

At the root of my worries is simply the fear that I'll be taking away a choice of hers, in a world that's already going to be trying to do that at every turn.

Sure, she'll ideally recognize this based on the kind of parent I am, and the relationship she has with me. But what message does it send when you're willing to share photos that touch upon your sex life or your fat rolls or the pizza you just devoured or the rad blogger you just met, but nowhere do you share photos that touch upon your parenthood? Or on this little creature who's changed everything and given you so much?

I'd be lying if I said that this brand of rationalizing has alleviated all my concerns when it comes to sharing pictures of my baby-to-be. At the root of my worries is simply the fear that I'll be taking away a choice of hers, in a world that's already going to be trying to do that at every turn. There's also the fear of how she will be received. Being a fat person on the internet — particularly one who does not apologize for being fat — means I'm no stranger to online trolling and harassment. I'm no stranger to the capacity that faceless beings behind a screen have for cruelty. Instinct makes me want to shield my daughter of that, for as long as I can. Because many people will find any excuse to be cruel as it is.

But this, I suppose, is one of the risks of the internet. There are many, sure. But there are also plenty of benefits. Had it not been for the internet, I never would have found the plus-size fashion community, the radical size-acceptance community, and the myriad spaces in which they intersect. I never would've found the plethora of feminist zines and publications and writers that've so enriched my time on this planet. I never would've embraced my own body, or trusted in my abilities to turn my love of writing into a career. The internet — despite how deeply it can stress me out at times — has been a source of a lot of beauty, connection, and personal growth for me. To share my daughter with it, at last via the communities and spaces in which I've found these things, is hopefully to share them with her, too.