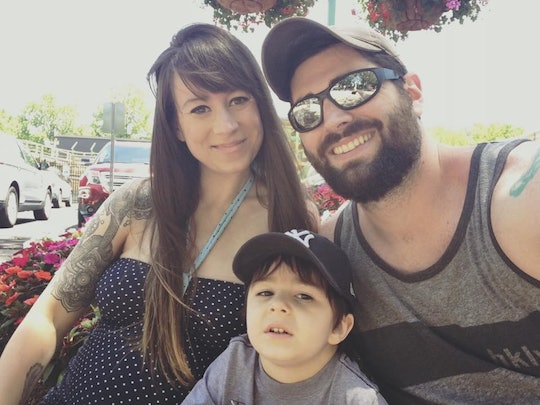 Honestly, Sometimes I Think Becoming A Mother Was A Mistake

I was sitting next to my 6-month-old in a hospital bed, holding his little hand as he played with a variety of toys and tattered books. It was my fault he was in that bed; my fault he was being held in the emergency room of the nearest children's hospital for observation; my fault his father was racing to us from work, afraid and panicked. And it was in that moment that I thought to myself, "I made a mistake. Becoming a mother was a mistake."

I was working from home, trying to feed my son and answer work emails simultaneously. Our apartment was a very small one-bedroom, so my partner and I agreed that purchasing a miniature high-chair — one that can be attached to chairs or sit on counters — was the way to go. So there my son was, strapped into his high chair on the kitchen counter, eating bits of whatever the hell I made him that morning as I sat, facing him, on our couch, looking at him then my computer then him then my computer.

It was when I looked at my computer that he pushed himself off the kitchen counter and onto the floor, breaking the high-chair and letting out a scream I, to this day and almost four years later, cannot forget. In the hustle and bustle of another frantic morning, I had failed to notice that — surprise surprise — my son had grown, and was now able to put his perfectly plump feet on the kitchen counter. I had put my son in danger, without even knowing it.

Those moments holding my son — hearing him scream and cry as I waited for the ambulance to arrive — are among the most horrific of my life. The ambulance drive to the hospital — in which my son was strapped to a gurney and, even though he was smiling, seemed so small and fragile and out of place — are among the most guilt-ridden of my life. The kindness of the EMTs — especially the new dad who, in an effort to assuage my guilt, shared a story of him accidentally dropping his child — could not stop me from thinking the same thought over, and over, and over again: I shouldn't be a mom. I can't do this. I have made a mistake, and my son is paying the ultimate price for it.

I believed that every mistake I made, from the minuscule to the monumental, was proof that I had signed up for a job I was in no way capable of doing.

My son turned out to be just fine; a few scrapes and bruises, but other than that perfectly OK. He didn't suffer a broken bone or a concussion, but I suffered from a shattered confidence. I was only six months into the job as a new mom, and I had already sent my son to the hospital. What kind of mother was I, if I couldn't keep my son from falling off a counter? What kind of mom was I destined to be, if I had already failed to keep my son safe?

Turns out, a typical one — I just didn't know it yet.

Before that day, when my son fell and I started to question my choice to become a mom, I thought I had to be perfect in order to provide my son with the love and care and comfort he needs and deserves. I believed that every mistake I made, from the minuscule to the monumental, was proof that I had signed up for a job I was in no way capable of doing. I had so much self-doubt, as a woman who came from a dysfunctional and abusive home, that I was convinced even the smallest misstep would hurt my son in both the short- and long-term.

I've since realized that, well, that just isn't true. I've been forced to accept the fact that I will make mistakes; that motherhood hasn't magically transformed me into some other-worldly being who's incapable of screwing up; that while I don't want to expose my son to my unnecessary snafus, doing so can actually provide him with some real, beneficial learning moments — moments that will only benefit him as he continues to grow and learn and find out more about himself and who he wants to be.

I remember that I don't have to be perfect to be the perfect mom for him.

That's not to say, of course, that I still don't experience situations that leave me partially convinced I made a mistake when I decided to become a mom. The days when I'm so overwhelmed all I can do is cry; when I feel like I'm failing at every single avenue of my life; when my 3-year-old son tells me I work too much or when I'm so behind in work I can barely keep up... it all makes me feel so inadequate and out of place and like deciding to be my son's mother wasn't the best decision I could've made.

But then my son comes up to me randomly, without prompting, and tells me he's proud of me and that he loves me and that I'm his "bestest girl," and I remember that I don't have to be perfect to be the perfect mom for him. And that while I have made so many parenting mistakes in the past, and will undoubtably make many more in the future, choosing to be a mother wasn't one of them.