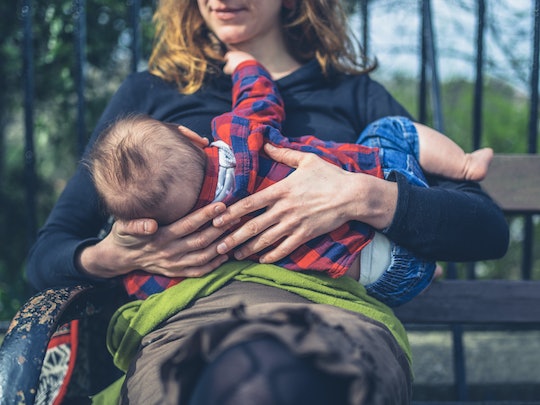 Honestly, There's No Way I Could've Breastfed Without Formula

Breastfeeding was hard. In fact, for me it was one of the hardest parts of new motherhood. To try to make things easier, I bought damn near every breastfeeding product on the market, including breastfeeding books, nursing bras, breast pumps, breast pads, nipple creams, herbal supplements, lactation cookies, prescription drugs, a supplemental nursing system, special bottles, and breast-shaped ice packs. In the end, though, the one thing that helped me breastfeed was actually formula. Hell, there's no way I could've breastfed without formula. It was totally the unexpected MVP of my breastfeeding journey.

Unfortunately, I didn't realize how helpful formula could be until my second child was born. With my first, I felt extreme pressure to exclusively breastfeed, even though it was physically impossible for me to do so. I spent thousands of dollars on expensive products and appointments with lactation consultants; far more than I spend on almost a year of formula, actually. So, for me at least, breastfeeding wasn't the "free" or "cheap" choice when it came to feeding my child.

When I wasn’t able to breastfeed exclusively, I honestly thought I had failed as a mom. So many people told me that if I supplemented with formula I would ruin our breastfeeding relationship, my baby would get mythical conditions called “nipple confusion" or "bottle preference," and I would ruin my chances of breastfeeding her altogether. I also heard that even one bottle of formula would compromise her “virgin gut," resulting in her getting sick, getting allergies, or even dying. It seems somewhat laughable now, but as a new-mom I was terrified. The amount of pressure we, as a society, put on new moms is ridiculous, and the mythology about exclusive breastfeeding has gotten way out of hand.

Because I knew about my supply issues in advance, I was definitely better prepared to give breastfeeding another shot with my second child. I told the nurses at the hospital that I needed to supplement with formula, thinking that they would bring me some no questions asked. I mean, my daughter had literally starved when I couldn't make enough breast milk. I thought that supplementing with formula at the hospital was the best way to prevent the same from happening to my son, and figured the people responsible for his care, and mine, wouldn't hesitate to do what was best.

I started supplementing with formula after every feeding, and after I took my son home from the hospital I met with a board-certified lactation consultant and a breast-feeding physician, who both encouraged me to redefine my breastfeeding goals and view formula as life-saving, nourishing, healthy, and safe food for my baby.

But instead of bringing me formula, the nurses brought me a breast pump and asked me to sign a medical release stating that I was aware of the "risks of giving my baby formula." It was so triggering and invalidating. I felt subhuman, even when I found it in me to write “refuse to sign“ in big block letters across the form. Thinking back, I’m pretty proud of that moment, even though, at the time, I felt like a total failure. Again.

I started supplementing with formula after every feeding, and after I took my son home from the hospital I met with a board-certified lactation consultant and a breast-feeding physician, who both encouraged me to redefine my breastfeeding goals and view formula as life-saving, nourishing, healthy, and safe food for my baby. My first breastfeeding goal was to nurse for a week, then a month, then six months. Combo-feeding with formula made breastfeeding success possible, and I was able to hit the very goals that were seemingly impossible when I was exclusively breastfeeding.

I have so many happy memories of nursing him, both with my body and with a bottle of formula.

With the help of formula, and sheer will, I went on to breastfeed my son for eight months, giving him formula as needed to top him off when he was still hungry after breastfeeding or when I didn't pump enough to feed him while he was at daycare. Most importantly, though, he thrived, and as a result, I thrived, too.

I have so many happy memories of nursing him, both with my body and with a bottle of formula. Over time, my guilt about not being able to "exclusively breastfeed" faded. I also learned that science says supplementing with formula doesn't actually interfere with breastfeeding at all. In fact, it may even actually help other parents continue breastfeeding in the long-term, too.

In 2013, a small study published in the journal Pediatrics showed that parents who supplemented with formula in the hospital actually breastfed longer than parents who didn’t. The researchers attributed the effect on confidence — moms who were less worried about whether or not their babies were getting enough were more likely to stick with breastfeeding.

I couldn't have breastfed without formula, and I wouldn't have fed my baby any other way.

A larger study, including 164 parent-child pairs, published March 2018 in The Journal of Pediatrics similarly found that giving breastfed babies formula supplements in the hospital did not interfere with breastfeeding, levels of "helpful" gut bacteria, and even going on to exclusively breastfeed. Perhaps most importantly, formula supplementation can be an important way to reduce hospital re-admissions for babies whose moms don't make enough breast milk or have a delay in their breast milk coming in.

So, why don't nurses and doctors talk about combo-feeding or supplementing with formula as something breastfeeding moms can try? Nearly every book and article I'd read about breastfeeding told me that if I gave my baby a "single bottle of formula" I would ruin our chances as successfully nursing. Literally nothing I read mentioned that there are real risks to your baby if you don't make enough breast milk. It's easy to feel like formula will harm your baby or guarantee that they will be less smart or healthy than their exclusively breastfed friends, but in many cases it's actually the best thing for you, your baby, and your breastfeeding goals.

Formula is amazing. For me — and other parents — it was totally my BFF when it came to breastfeeding. I couldn't have breastfed without formula, and I wouldn't have fed my baby any other way.