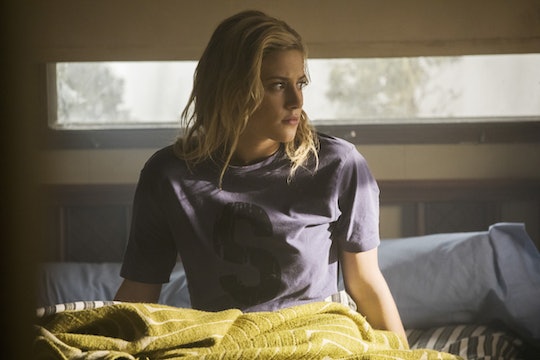 Somehow, Riverdale is already just a couple of episodes away from its fall finale and then winter hiatus, which means that we’ll be getting some solid answers to the most pressing Black Hood questions any day now. One particular question that's been on my mind, though, is: how are the Black Hood and Betty connected on Riverdale? So far, Betty has been the main person the Black Hood has interacted with and although Alice and Sheriff Keller seem to think that the person contacting Betty is different from the one who sent the first letter to the Cooper house, I’m inclined to believe that the Black Hood really does have as much of a connection to Betty as he says. How big or important that connection will be, however, remains to be seen.

There are plenty of Black Hood theories floating around out there that question who he is and what his true motive might be, but the one common thread that a lot of these theories seem to have is Betty herself. There’s no way she’s imagining these phone calls or faking all of the correspondences she’s had with the Black Hood, so Betty’s connection to him has to be real and crucial part of figuring out who he is.

One possible connection she might have to the mysterious Black Hood could be a familial relation. Since the Black Hood himself has told Betty that they’re one in the same and that he’s protective of her, you can't help but wonder if the Black Hood is someone in the Cooper family.

The immediate suspect there would have to be her dad, Hal, who already has green eyes to match those of the Black Hood, and the general age and build that the killer has been suspected of having. And like the other members of the Cooper family, Hal has been through a lot since the beginning of Season 1, so being pushed over the edge is a definite possibility.

The Black Hood could also be Betty’s long lost illegitimate older brother, who has yet to pop up this season. There’s also the possibility that the Black Hood is someone calling the shots, while the actual hooded killer is someone working under them. If that’s the case, any number of the characters connected to Betty could be the mastermind.

From what the suspected Black Hood has told Betty, she inspired him with her town speech at the end of Season 1, which helped him to start his string of killings and attacks. If that’s true, then at the very least, Betty has the closest connection to the Black Hood out of anyone else in Riverdale. And whoever he is, he may simply be someone unhinged enough to feel a connection to her, even if he has no real relation to Betty.

There have been theories that the Black Hood is Sheriff Keller or Hiram Lodge, but if he really is connected to Betty in this personal way, it’s safe to rule out both of those possible suspects as red herrings, despite the clues that have been thrown out to point to them. Chances are, the Black Hood is going to have some kind of blood relation to Betty or, at the very least, be connected to her by way of Alice’s Southside Serpent past.

I know this isn't the Betty Show, but there’s no getting around the idea that the Black Hood is at least somewhat obsessed with her — and once we're able to figure out why that is, then more pieces of this dark puzzle can start falling into place.