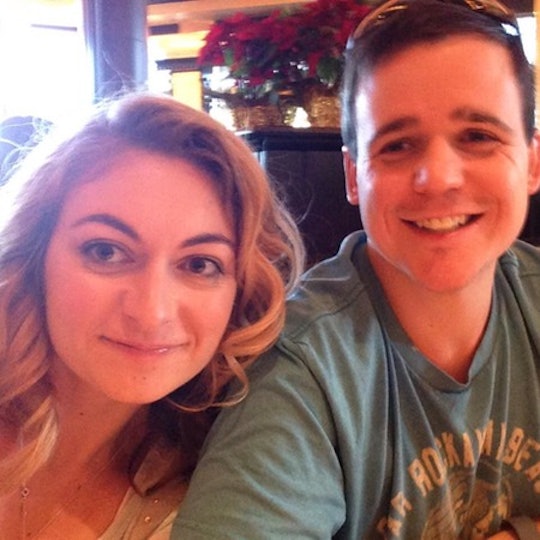 Before I became pregnant with twins, my partner and I had a pretty healthy sex life. We weren't joined at the genitals, but we definitely spent more nights as a pretzel than as two breadsticks. We expected it would be business as usual while I was pregnant, but when I went into premature labor at 27 weeks, our sex life got derailed indefinitely. My OB managed to stop my labor from progressing but ordered me on bed rest and told me sex was strictly off the menu.

The biggest bummer about being told that I couldn't have sex was that I was just starting to enjoy having it again. During the first trimester of my pregnancy our sex life hit a spell as dry as the crackers that were my main source of sustenance those months. I was nauseous all the time. I was so tired when I got home from work that I would fall asleep on the couch by 6 p.m. When I woke up for a snack a couple hours later, I would cry actual tears at the thought of having to walk upstairs to get to bed. I felt like garbage, and sex was the last thing on my mind. We may have had a perfunctory weekend hook up here and there, but in general my body felt like a wasteland, not a wonderland.

Lying in bed doing nothing all day left me with zero endurance. Seconds after we started, my fingers and and triceps would cramp up. I had to take so many breaks that it was hard to get the job done.

Even though sex was verboten, I still wanted to partake in adult activities, so we tried to keep the party going with some good old fashioned BJs. But when you're on bed rest, you have to stay laying on your side. If you're on your back for more than a few minutes the pressure of the baby (or babies) on your main artery can cause you to pass out. Trying to pull off fellatio while posed like a mermaid was awkward. I didn't feel like a sexy Ariel at all and not just because I felt like I was the size of a manatee. It was more because I felt like a vending machine: "Please insert penis here." There was no intimacy.

We tried making things more personal with a hand job, so we could at least kiss and look each other in the eyes, but that didn't work either. Lying in bed doing nothing all day left me with zero endurance. Seconds after we started, my fingers and and triceps would cramp up. I had to take so many breaks that it was hard to get the job done. Plus, my husband is a gentleman, and he didn't like not being able to return the favor. We were both frustrated with how this one-sided affair was going, both because I wasn't getting to join in any of the games and because logistically it was a nightmare. So we decided perhaps it was time he took matters into his own hands, literally, but that was strange in its own way.

Everyone masturbates, even married people, but it's weird knowing exactly when your partner's going into the shower to do it. We'd try to pretend like he just took a shower, but we both know how long it takes him to wash his hair and I knew when what was going on when the water ran for just a few minutes longer than usual. He went to the gym on his own while I was on bed rest and showered there too, but I'd like to think that my husband is far too civilized to get off in a public space like that. Honestly, I've never asked because I'm scared to know the answer.

During one particular dream involving Channing Tatum, his workbench, and some gelato, I woke up myself on the brink of orgasm with the desperate need to pee. I was relieved that I hadn't actually finished the dream or finished in real life (because I was worried that an orgasm might cause me to go into premature labor), but also, man, I wish I'd stayed asleep to see how that one ended.

Throughout all this we were still concerned for the the babies, so that put a bit of a damper on both of our sex drives. But pregnancy hormones stop for nothing. Just because I wasn't supposed to have sex while on bed rest doesn't mean I didn't still really, really want to. Sometimes we'd start chatting about random things, like who Jon Snow's mother could possibly be and without meaning to we'd wind up playing, "remember the time when" and talking about particularly memorable sexy times we'd had in the past. It was fun for him, because he got to cool off by doing other things in the shower afterwards. but I was left all worked up, fantasizing about being in a isolated cave with a certain member of the Night's Watch.

Luckily, I could still dream about sex, even if I couldn't have it. I napped a lot while stuck in bed and all of my dreams were wildly vivid during my pregnancy. Occasionally I'd have sex dreams featuring my partner or even my celeb crushes (or both). During one particular dream involving Channing Tatum, his workbench, and some gelato, I woke up myself on the brink of orgasm with the desperate need to pee. I was relieved that I hadn't actually finished the dream or finished in real life (because I was worried that an orgasm might cause me to go into premature labor), but also, man, I wish I'd stayed asleep to see how that one ended. I was so grumpy over this edging out that I woke up my partner up, refused to tell him why I was so angry and asked him to go downstairs and get me ice cream even though it was 4 in the morning.

I'd like to say that my mothering instinct was so strong that it overrode my sex drive while I was on bed rest, that I was this zen, calm earth mother goddess who sipped green tea and rubbed cream on her belly as she contemplated the arrival of her babies, but I was scared and uncomfortable and I often thought of how awesome an orgasm would be to help me destress from all that. OBs tell new moms to wait six weeks after giving birth before they resume sexual activity, but we only lasted five. I had waited long enough.