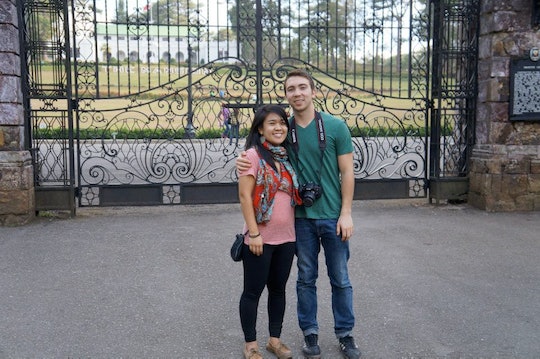 How Being Short Has Taught Me To Love My Body

I stopped vertically growing sometime around middle school. Most of the other young ladies in class had a few more inches to go, and the guys skyrocketed through puberty. I drank my milk, ate my veggies, and exercised regularly, but my height refused to budge after I turned 12. I stand at a humble 4 feet and 11 inches, which is common given my Filipino ethnicity. Through much of my adolescence and well into my adulthood, I’ve been described as petite, small, “tiny,” “adorable,” “fun-sized,” and some more offensive descriptors that I’ll leave out. Classmates used to stand next to me and rest their elbows on my shoulders, calling me an arm rest. Despite all the jokes and sickeningly cute descriptors, I’m more than OK with my height. In fact, I love being short.

The unwarranted short jokes went beyond my grade school years. I’ve been asked for my I.D. at movie theaters when ushers mistake me for a preteen attempting to sneak into an R-rated movie. I shamelessly stuck out like a sore thumb when I studied abroad in the Netherlands, the world’s tallest country, and joyfully rode my children’s bike (yes, true) to and from the University. When I was teaching in an elementary school in my early 20s, my fifth and sixth grade students would stand beside me everyday before class to compare their heights with mine to see how fast they were growing.

Every now and then someone will ask me the innocent yet annoying question:

My answer to that is plain and simple: being short is the only reality I have. I know nothing aside from the existence of a person who stands proudly right below 5 feet. Instead of feeling particularly short, I don't feel like I lack at all in height — I'm just like any other grown-up person. The short jokes never actually dig under my skin, as I take most of it as either ignorant or endearing. I function like anyone else, with the addition of the liberal use of a stepstool in the kitchen.

When my favorite hot sauce is located on the top shelf in the grocery store and no clerk is in sight, I simply climb the shelves to grab it. And, no, I am not handicap on my license. (Yes, someone has asked that.) Most driver seats adjust appropriately so that I can see well over the dashboard.

I've never viewed being short as a total inconvenience, it’s just the way I exist and I have no problem with it. I am healthy, all my smaller-than-average limbs function perfectly, and I have the ability to pursue my dreams and live life happily. For me, there’s no point in fixing something that isn’t broken. In my case, my height is something I can’t change. I could wear ultra high heels on a daily basis, but that just sounds sounds cruel and sadistic. My 4 feet and 11 inch body is what I’ve been given, and aside from the disappointment I feel when pants don’t fit right (which I’m learning is actually not uncommon for people of all lengths), I’ve never had problems with being short.

Hell, being short even comes with a few perks. I can conveniently hop in the front of group pictures and center a frame because nearly everyone’s heads float right above mine. I can sneak up to the front of a stage during a standing room-only concert because few people can complain that I'm blocking their view. I easily slip under the unsuspecting, sharp corners of shelves, avoiding potentially disastrous head injuries. Being short is wonderful, and loving yourself despite being “relatively this” or “below average that” is even better.

As fate would have it, I found a loving partner who is taller than I am (hard not to be) but not by much — he stands at an average 5 feet, 7 inches. When I brought him home for the first time, my parents playfully commented on how he was “short for a white guy.” We laughed, and I joked back that none of us smaller-than-average folks had any right to comment on height. When my partner and I found out we were having a kid, the short jokes commenced. We knew he or she was likely going to resemble a hobbit thanks to genetics, and we also knew there was nothing wrong with that. Hobbits were among the most heroic characters in The Lord Of The Rings.

Flash forward a few years later, and we have a 2 year old who is absolutely dynamite. She flutters around with her princess costumes, singing songs she made up on the fly, her joyful voice carrying to the far corners of the house, so much fierceness coming out of a mini vessel. Oftentimes well-meaning strangers will approach our rambunctious daughter and, upon learning that she’s 2, will quickly respond:

Wow! She is so tiny!

Which is both surprising and not surprising at all. Due to her genetics, she’ll likely be one of the smallest kids in her American classrooms growing up. But she’s as curious, defiant, and willing to scale walls for ice cream as most other 2 year olds, regardless of her petite body. I forget she barely makes the growth chart because in my eyes, she develops at such an astonishing rate that it’s hard for me to keep up. She’s perfectly healthy, growing steadily, and is everything I can expect out of an exuberant little human.

As I think about my daughter and the unwarranted comments she'll inevitably continue to hear regarding her height, I can only model for her how to be comfortable in her own skin and love herself. Height is not a bad thing — it’s exciting to mark up your height on your parents’ wall as a kid and see how fast you grow ­­— but I would hate for “lack of height” to be another lens from which my daughter could view her body in a negative way. Would I like her to shoot up like a sprout and be taller than me? Absolutely. Would I be bummed out if she were just as short, perhaps even shorter, than I am? Absolutely not. Besides, there are so many excellent role models who sport tiny frames, like the wise and nimble Jedi master Yoda from Star Wars (fictional, yes, but still legendary), or the hilariously witty comedian Amy Poehler who stands at 5’2”.

Height, or lack thereof, has never dictated my success, power, or standards of beauty. My short legs have been sufficient in taking me around the globe, and then some. My daughter’s height, however tall or short she may be, sure as hell won’t inhibit her from accomplishing her own dreams and seeing her own beauty. As long as our senses of self and positivity aren’t stunted, that’s all that matters.