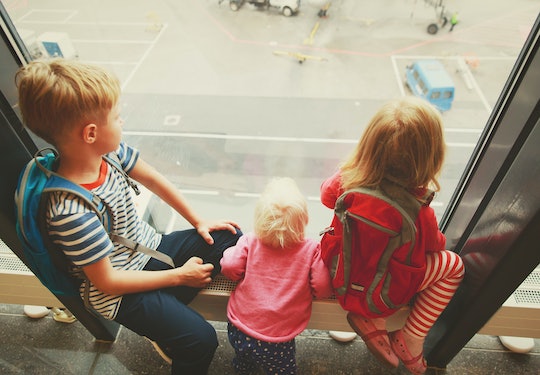 How Being The Youngest *Really* Impacts You Later In Life, According To An Expert

There are a lot of TV and movie premises based on birth order of children. The Brady Bunch, Full House, and others seem to make stereotypical traits of certain birth orders at least one or two punchlines in every episode. But is there any truth to those stereotypes? If you’ve dreamed of having a big family with multiple children, you may be wondering how being the youngest actually affects you later in life. What exactly are you getting yourself into? Will the oldest be the most responsible while the youngest is the one that goes wild? What about the middle children, who seem to always be forgotten?

According to Maureen Healy, an expert on sensitive children and author of Growing Happy Kids, “There is no blanket study that reveals the final answer on how younger children fare later in life,” she tells Romper in an email interview. “They certainly can be successful as long as they overcome being spoiled (if that was the case) or having everything done for them. If a youngest child takes responsibility for his or her life, develops focus and the discipline to bring his or her gifts to the world, then success is certainly possible. Birth order doesn't predispose you to do well or have certain challenges.”

However, Healy says she’s noticed in her career focusing on children and family dynamics that younger children do seem to possess certain traits that are different from their older siblings — at least while they’re younger. “Interestingly enough, I mostly work with first-born children. I'm not sure if it's because I'm a first-born child or how the universe organizes my clients, but I have 75 percent first-born children, 15 percent middle children, 5 percent only children, and 5 percent younger children. What I do observe is that the youngest children tend to have to make the 'most noise' to get attention from their parents,” Healy explains.

As far as noticeable traits she’s witnessed firsthand, first-born children tend to be the more serious of the group and take on a leadership role within their families. Younger children try to make people laugh more often and are usually sillier and more comedic. Healy says, “One idea is that the youngest child is vying for their parents' attention and being humorous helps them gain attention. For example, Stephen Colbert, Tina Fey, and Jennifer Lawrence are all youngest children. Along the same lines, youngest children — in general — tend to be more relaxed than their ‘go-getting’ older siblings,” she says.

Additionally, one of the many reasons Healy thinks youngest children are so relaxed is because their parents are more relaxed with them. Ever get in the fight with your parents because they were so strict with you, but they let your youngest sibling get away with anything? I rest my case. “Any parent knows they parent differently with their first child than their last. It's simply human nature. Said differently, parents learn to relax as they continue parenting over the years,” Healy explains.

According to Healy, middle children are a totally different ballgame. “Middle children ... oftentimes get lost in the middle because parents are concerned with their oldest (where is she, what is she doing) and youngest (is she OK, can she also hike up this mountain with us) while the middle child is along for the ride and develops the ability to be cooperative and go with the flow, which isn't necessarily an eldest or youngest child characteristic,” Healy says.

So though your personality may potentially be somewhat shaped by your birth order, your destiny is definitely not set in stone based off of whether you’re an oldest, middle, or youngest child. Just like how not all only children are spoiled, bossy, and always get their way (thank you very much), younger children aren’t always spoiled, loud, obnoxious and have to be the center of attention either. Other than maybe you’re “the funny guy/gal” or you’re better at public speaking, everyone seems to start with a clean slate and creates their own destinies.