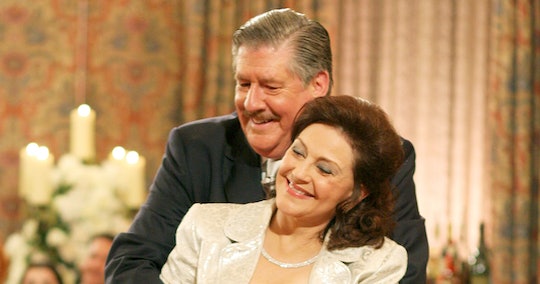 How Did Richard Die In The ‘Gilmore Girls' Revival? He Is Missed In The Netflix Show

The first time it was brought up in the revival, Lorelai was voicing her concerns over her restlessness and Rory suggested that it had to do with missing Richard. I like to think that part of Lorelai's anxiety has to do with some kind of mid-life crisis, but she also seems as youthful and fast-talking as ever, so let's not go there just yet.

This isn't Richard first heart attack on the series, but since Herrmann's real life death was unavoidable as filming began for the Gilmore Girls revival, Richard's death was written in as a sudden heart attack, but just like in real life, he hasn't been forgotten. The biggest piece of evidence of that, of course, would be the wall-sized mural of the man himself.

In the series finale of Gilmore Girls, Richard's last words to Lorelai were about how proud he was of her and how he regretted the way their relationship had been in the past, when she was a teenager, and that "recent events", referring to his heart attack, made him realize that even more. Are you crying yet? In the Gilmore Girls revival, there was a flashback to Richard's funeral, during which Lorelai revealed that Richard's heart attack was sudden, which makes it a different kind of tragedy than if he'd been suffering for along time within the series.

After Richard's funeral on the Gilmore Girls revival, all was not as somber as it could have been, though, because in true Lorelai fashion, she tried to switch places with everyone else as they told stories about him. Watching her try to move a sleeping man's wheelchair and then try to kind of hide behind it made it a lot easier to laugh through the tears.

But the more important thing about Richard's funeral was everything that followed it, as Emily and Lorelai had a long overdue confrontation. Emily, telling her about how much she'd felt disrespected by Lorelai throughout the years, and Lorelai, defending herself while explaining herself. It would have been a real turning point in the relationship, but Lorelai left out of anger and, according to her conversation with Rory, she hadn't had much contact with Emily in the four months that followed.

Richard's death on the Gilmore Girls revival was sudden for the other characters, and obviously, less unexpectedly, the loss impacted the relationship between the Gilmore women he left behind.