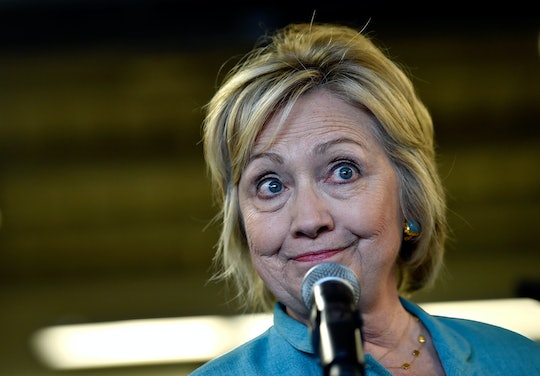 How Far Ahead Is Hillary Clinton In The Polls? Trump Is In Trouble

The bombastic Republican presidential nominee, Donald Trump, has built his campaign on making comments that are objectively factually unsound, offensive, and short-sighted. And in the midst of a tumultuous week that many political commentators have labeled his worst ever (during which he sparred with the family of a Muslim-American soldier who died in combat), the business mogul publicly announced his belief that the general election in November will be rigged against him. That's likely a response to the fact that he's experienced a significant slide in voter favorability against the Democratic candidate. But how far ahead is Hillary Clinton in the polls after Trump's latest series of gaffes? The most up-to-date data indicate that his bid is in trouble.

Experts, including President Barack Obama, have condemned the assertion that the November matchup with be rigged in Clinton's favor; Business Insider reported that the idea as touted by a politician is just plain dangerous as it could threaten a peaceful transfer of power. But Trump, who's widely and notoriously perceived as thin-skinned, employed the unsubstantiated notion to as a preemptive defense mechanism against his eventual defeat — and that's looking for and more likely, as a brand new Washington Post-ABC News poll revealed Clinton has leveled an eight-point lead over her opponent in a head-to-head race.

The poll, which reported its results on August 7, found that if the race were between just Clinton and Trump, she'd garner 50 percent of the vote to his 42 percent, according to The Washington Post. When pollster factored in the two other candidates vying for the Oval Office — Libertarian Gary Johnson and Green Party nominee Jill Stein — Clinton still lead Trump 45 percent to 37 percent.

Before both the Republican and Democratic National national conventions last month, a Real Clear Politics poll concluded that Clinton had secured an approximately 3-point lead over Trump, significantly less of an edge than the one she now boasts. In just the past week, though, Trump publicly insulted the family of Army Capt. Humayun Khan, who died in combat and whose father called out the Republican nominee for his disparaging remarks about Muslims during the DNC, a move that drew ire from members of his own party. He also insinuated that women who experience sexual harassment at their jobs are weak and should find somewhere else to work, and refused to endorse three Republicans enmeshed in reelection races, including House Speaker Paul Ryan, before giving in to partisan pressure to do so. To top things off, Trump then even kicked a mom with a crying baby out of one of his rallies, despite later claiming that it was done in good fun.

That all happened over the course of one week, people, and the lack of political finesse and reactionary nature has seriously dinged the candidate's popularity. And that's not to say that Clinton enjoys universal approval — far from it. In the same poll, 60 percent of potential voters reported that they don't view her as honest or trustworthy, and a whopping two-thirds said she's "too willing to bend the rules." Americans have long viewed Clinton as untrustworthy, and the fact that she illegally used a private email server as Secretary of State has only exacerbated this perception.

Still, the Washington Post-ABC News poll indicates that Trump's repeated displays of ignorance — like revealing that he had no idea Russia does, in fact, have a military presence in Ukraine — are starting to hurt his chances. Sixty percent of respondents said they don't believe he has a "good understanding" of world affairs, while 70 percent are satisfied that Clinton does. And perhaps even worse for him, 61 percent view him as just plain unfavorable.

Trump does have diehard supporters — he wouldn't have made it through the cutthroat primary season without them — and Clinton is by no means lacking ardent detractors. But polls are showing a chasm opening up between the two, although the Clinton camp is unlikely to get complacent. The Washington Post pointed out that we are still in the throes of post-convention uncertainty about where the contenders actually stand, though, and that the next opportunity for a real chance will be after the first general election presidential debate, scheduled for Sept. 26.