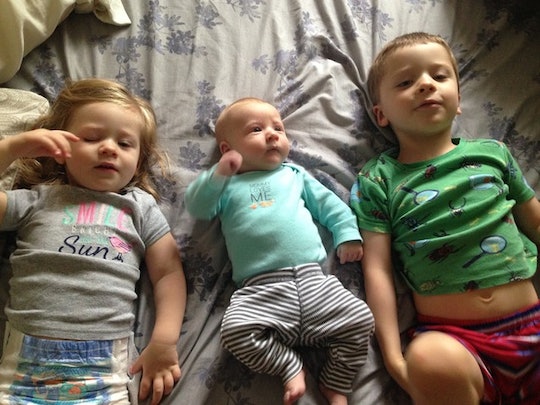 How Having Kids Helped Me Cope With My Anxiety

My mom always used to tell me this story of how she lost me one day while we were shopping at the mall. I wasn’t really lost, I used to hide in the clothing racks and peek out watching people and I’d usually come right out when my mom called for me, but this day, for some reason, I didn’t. She described the panic she felt. The heart-stopping, my life will end right here and now if something has happened to my child panic. I didn’t understand it then, but once I had my first child, I knew it almost instantly. It wasn't after I'd had my third son that I realized just how much having kids has helped me cope with my anxiety.

When my first son was born, he spent the first week of his life underneath bright lights in an incubator for jaundice. It wasn’t serious, but seeing him there — small, fragile, unable to be held for large swaths of the day — caused that heart-stopping panic to set in. We took him home after a few days, and he was perfectly fine. Then we took him in for check-ups, he always looked good and healthy, even if he was a little on the small side. There was nothing wrong.

But my anxiety didn’t go away. That panic slept in my bones, and each time he fell asleep or got sick or was out of my sight for a second, the panic would wake and rage inside me until I was certain my boy was going to die. I'd wake him from naps to make sure he was still breathing. I'd pull over on the side of the car when he wouldn’t make noises to respond to me. I'd call his grandparents obsessively when they babysat to make sure he was OK.

I would lie awake at night imagining horrific scenarios. Those tragedies you read about, the horrible things people never saw coming — seizures, childhood cancer, a gunman in a kindergarten, furniture crushing children to death, a boy being run over in a parking lot while his mother was loading his siblings into the car, a child disappearing and remains being found months later — I saw it all coming for me.

At that moment I couldn’t bear the thought of having more children. My heart was at capacity and my mind was always running wild. I didn’t sleep at night. I was constantly in the grips of deep, horrible fear. I couldn’t imagine feeling this kind of fierce, consuming love for yet another person. I couldn’t imagine the panic expanding to include yet another life.

Soon after we decided that we weren’t having any more kids, I found out I was pregnant. I worried about struggling with postpartum depression again. I worried about how much worse it would feel when I read something horrific, knowing that I now had two chances to lose it all. I worried constantly through my pregnancy. I feared the day I would give birth, wondering if this time I would die. I worried about stillbirth and complications. I worried about car accidents. There was no rhyme or reason to my anxiety. It was persistent and irrational, and I was unable to stop it.

After my daughter was born, however, I noticed that my anxiety was less intense than it had been with my son. I was not constantly checking to make sure she was breathing. I wasn’t as consumed with dark thoughts at night. I didn’t look at her and think about losing her.

There were still moments of panic, like when my son knocked over our vacuum cleaner and it landed inches from her head, but now when I felt panic it was warranted, and it faded. I would worry about things that were out of my control, but only rarely. I cut back on my consumption of horrifying news. I started to enjoy motherhood.

When my third son was born, the panic was gone almost completely. Having more kids had steered me away from my constant anxiety. There was less downtime to worry. As more things started to slip from my control, I saw that it was OK. They were OK. They would survive with or without my persistent worrying. Somehow it seemed that if eating a little dogfood didn’t kill them, they probably wouldn’t die in their sleep either.

Having more kids made me release control, and subsequently the frightening things that were out of my control seemed less scary. With every child came more things to do, another person to be responsible for, another person to love and care for. I didn't have time for the worries to consume me, because I had no other option but to go, go, go. I had three people who needed me. Instead of being consumed by my fear, I had to move through it. Sure, there are still moments when I worry. News stories will still stir those feeling of panic, but that, for me, will always be part of motherhood. I enjoy my children without the shadow of fear following me constantly. I know my coping mechanisms. I am mindful to give my body and my mind the time it needs. I know I am just one person, and I know that having another and another and another baby for the rest of my life isn't a long-term reality for dealing with my anxiety. But I also know that the births of each of my children gave me the chance to reclaim something my anxiety took from me. Now I have peace. Now I own my anxiety. It no longer owns me.