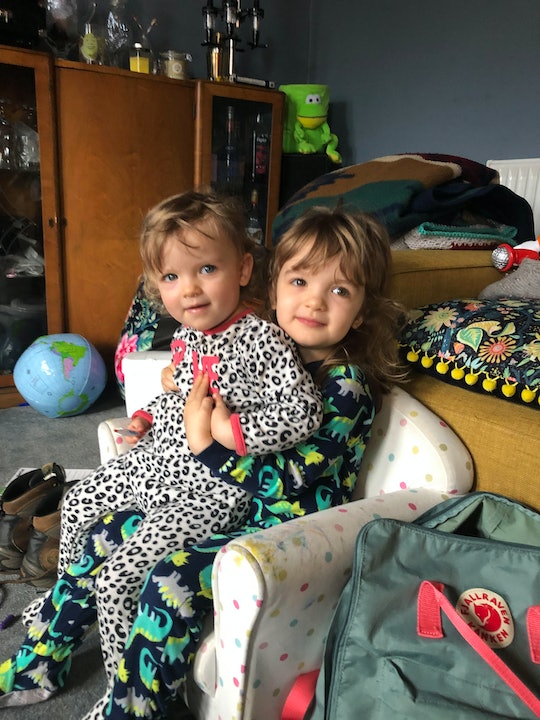 How I Got Over Wanting More Kids

When a friend recently brought her 2-month-old baby over, it didn't take long for me to get broody. As I listened to those fresh-baby-noises (the little hums and melodic grunts that are so sweet it's kind of heartbreaking), I thought, "I could do this again." For months, I've been going back and forth on the question of whether to have more kids. I've been catching myself, in moments such as these, missing having a tiny infant to cuddle with all day and sleep beside at night. My daughters, now 3 and 1-and-a-half, are growing more independent by the day, after all — but then I remember, my daughters are growing more independent by the frikkin day!

It's a wonderful thing, really. I look at them now, and I so often see them playing nicely among themselves. I see Luna, my eldest, assigning her robots, horses, and Barbies little narratives. I watch them confidently walk into rooms they've never been in. I take note of their blossoming bond with one another — a bond that, as it grows, seems to mean they need me just a little bit less. They are getting so much more from their sisterhood these days.

There are plenty of reasons I probably shouldn't procreate any more. On a macro level, there's the climate crisis. Temperatures are getting hotter, storms are getting stronger, sea levels are getting higher, and sometimes it feels like tomorrow as we know it is getting less and less guaranteed. There are less global, but no less relevant, factors as well — like the fact that our finances are stretched and saving for the girls' futures already seems like a pipe dream. College funds? Yeah, right.

The main reason I have gotten over having more children is a little bit more selfish, though. Quite frankly, things are getting easier now — and I don't want to give that up.

Still, there have been times when I've missed my personhood at large, when I've longed for the things outside of motherhood that bring me fulfillment. Be it pursing career goals, or working independently on pieces of writing I hope to someday publish, or dancing with friends until sunrise, or taking long, uninterrupted walks in the woods, or devouring books like they're candy, there are so many bits of my identity that have been pushed aside. There are so many things that felt difficult, if not entirely impossible, to navigate while having small, wholly dependent children.

Things are just starting to feel possible again. Mundane, day-to-day activities like putting a load of laundry in the wash or cleaning the toilet are doable. Bigger stuff, like getting into a more regular writing routine and revisiting the children's books I started conceptualizing years ago, feels within my grasp. Luna is away at preschool three days a week now, while Elia, my youngest, is fully weaned from nursing and can subsequently go longer stretches with a babysitter. My body is a little more my own now, as is my mind. A mind that, in the separation from such a full-on, everything-for-the-kids existence, is starting to feel a little less clouded, less governed by "mommy brain."

Things aren't just getting easier for me, though. They're getting easier for the girls. Luna, who struggled so much to accept her new sibling and frequently lashed out against her in violent demonstrations of anger and frustration, is much more chill now. As a result, Elia, who used to cry and cower away from her sister out of fear, has grown so much more trusting of Luna.

They've got a good thing going on between them, and adding another child to the mix might compromise that. At least right now, they are a pair. A third kid could potentially mean someone always feels a little left behind. A third kid could mean more outrage, despair, or regression from the preexisting ones. A third kid could disrupt the peace that is only just starting to feel within reach.

I can't know whether I'll change my mind in the future. Perhaps when my daughters are both in school full-time, I will long for the days spent drawing with them on the living room floor. Maybe I'll miss being needed so profoundly, being loved so unconditionally. Maybe I'll even miss the rough stuff, like the late nights of spooning my eldest to sleep because it calms down her anxiety. Maybe I'll miss nursing, as relentless as I sometimes found it in the moment. Maybe I'll miss it all.

For now, though, I miss myself more. I miss feeling passionate about stuff outside of my parental responsibilities. I miss filling my days with projects and meetings and creative endeavors more complex than brainstorming ways to fit all the recently washed clothes onto one small kitchen creel. I miss having the energy to even want to do anything else.

So, for now, there can't be any more babies. Sometimes, living for yourself has to take priority.