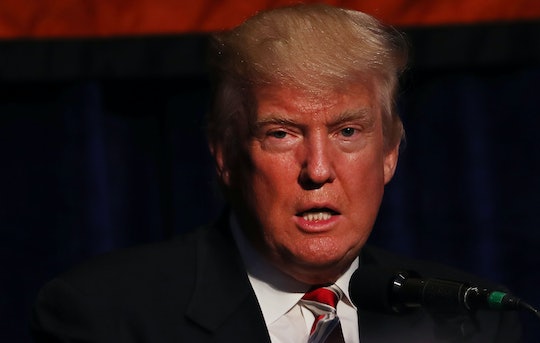 How Long Did Trump Actually Speak About Education In His Education Policy Speech?

Republican presidential candidate Donald Trump is polling abysmally among African American voters, has not addressed issues related to education in-depth throughout his campaign, and needs to win the noted swing state of Ohio to have any shot at winning the White House. He opted to attempt to address each of those issues by visiting a charter school in a majority-black Cleveland neighborhood Thursday to talk about the state of the nation's education system. But the stats on how long Trump actually spoke about education at the invitation-only event are unimpressive, as he spent a significant portion of his allotted time there insisting that he had always opposed the war in Iraq — a statement that fact-checkers have consistently and definitively deemed false.

The Trump team's decision to visit the Cleveland Arts and Social Sciences Academy was a strategic one. According to the latest Quinnipiac poll, Trump is just barely edging out Democrat Hillary Clinton in Ohio, garnering 46 percent of the likely votes to her 45. But his status among likely non-white voters there are much more dire: 81 percent report supporting Clinton, while only 11 percent say they like Trump. Trump has been been making a concerted (if incredibly clumsy, tone-deaf, and offensive) effort to win over African Americans, to negligible effect, and the Cleveland charter school visit fits that goal.

But Trump spent 15 minutes of his time among the members of this crucial voting bloc to repeat a proven untruth about his original position on the Iraq war, as well as his opponent's email server scandal and questions about conflicts of interest surrounding her family's charity foundation, Cleveland.com reporter Andrew J. Tobias reported while live-tweeting coverage of the event.

(For the record, citing Trump's stated 2002 approval of the invasion of Iraq during a Howard Stern interview and subsequent failure to voice opposition to the war until 2004, Politifact has rated Trump's claim that he's always been against it "false.")

The candidate did eventually discuss his views on education in the United States, focusing on school choice, which was fitting, considering that he was at a charter school. Several outlets reported that Trump had proposed creating $20 billion in school-choice grants for poor kids — one of the assertions that elicited applause from about half the audience members, some of whom were charter school students, according to Cleveland.com political reporter Henry J. Gomez.

Trump has voiced his enthusiasm for making school choice more accessible before, most recently at the Republican National Convention in July. Right after officially accepting his party's nomination to run for President of the United States at that major event, also held in Cleveland, he said, "We will rescue kids from failing schools by helping their parents send them to a safe school of their choice." Trump is also against the Common Core, which standardizes K-12 education in 42 states and Washington, D.C., but has not publicly proposed a plan to help college students pay for their degrees, according to The New York Times.

Right now, the 2016 presidential race is tighter than ever, and we've got less than two months until Election Day November 8. It's crunch time, and it's also certainly time for undecided voters to take time to analyze the candidates' stances on all of the most important contemporary political issues that our government is currently grappling with — and that means both domestic education practices and international conflicts.