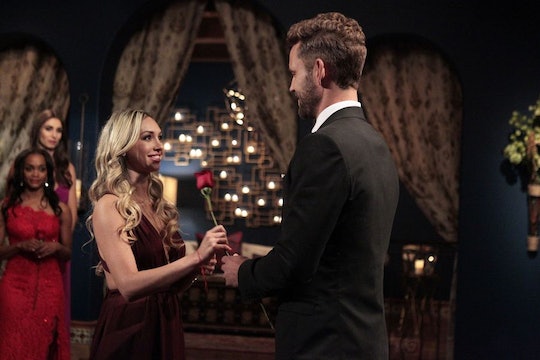 Raquel's Been In Corinne's Life A Long Time

Now that the dust has settled on Nanny-Gate 2017 on The Bachelor, it's time to just accept Corinne's nanny for what she is, and that's obviously something close to a family member. Judging by the way Corinne talks about the nanny helping her with every aspect of her life, it seems like she's been around for the contestant for a while, but how long has Raquel been Corinne's nanny? The Bachelor contestant has never been shy about being herself and not hiding any aspect about her life, including having a nanny as a 24-year-old woman.

Although she hasn't said anywhere how long Raquel has been her nanny, Corinne did post a tweet that has since been deleted, which said, "everyone needs to relax about the nanny thing. Raquel is part of my family so calling her a house keeper or Cleaning lady is disrespectful." Corinne currently helps run her family's multimillion dollar business, which Romper has speculated to be Armor Garage, an epoxy coating and flooring supplier for garages. Assuming that the business is as successful as Corinne lets on, then it's safe to assume that she and her younger sister grew up with a nanny, and it's entirely possible that their nanny as kids was Raquel, who is obviously close enough to Corinne for the contestant to consider her to be like family.

True, Corinne has mentioned the fact that Raquel makes her vegetable snacks on more than one occasion and even claimed on The Bachelor that Raquel likes to do her laundry. But that's also from the mouth of someone who has likely known Raquel since she was a kid, so for her, it probably seems very normal, especially if that's the lifestyle she grew up with. Unfortunately, there isn't much out there about Raquel and despite the fact that she's been with Corinne for years, there are no photos of her on Corinne's Instagram and no mentions of her on Twitter, except for the one deleted tweet.

Corinne has been the most outspoken and all-around open contestant so far this season on The Bachelor, and yes, she sometimes verges on entitled. Much like a 24-year-old who grew up with a nanny would act, some may argue. So you can't really blame her in a way, but you can also then assume that Raquel has been with her since she was a kid.

It didn't take too long for Corinne to bring up the fact that she has a nanny, though, and even while the room full of women on The Bachelor were in initial shock about it, Corinne owned it. "Raquel keeps my life together, OK?," she said. Though there isn't a definitive timeline, clearly Raquel has been a big part of her life for a long time. And based on the way Corinne talks, she doesn't expect for that relationship dynamic to end anytime soon.