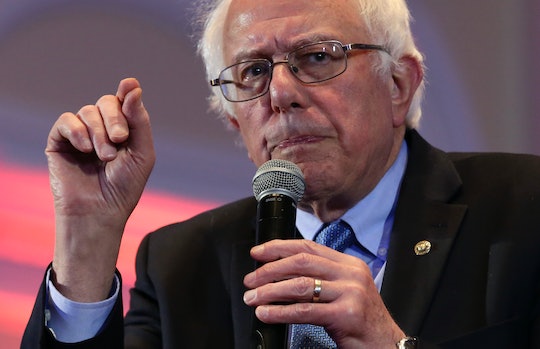 How Many Northeastern Primary States Does Bernie Sanders Need To Overtake Hillary Clinton?

It's another big day for the presidential candidates, both Democratic and Republican alike. Five Northeastern states are holding Democratic and Republican primaries on Tuesday, and, the race to become the party's nominee continues to heat up for all of the candidates. On the Democratic side, former Secretary of State Hillary Clinton is leading Vermont Sen. Bernie Sanders in both pledged and superdelegates. So, how many Northeastern primary states does Sanders need to overtake Clinton? He'd have to win big in Pennsylvania for starters, but, let's break this down.

With 384 delegates up for grabs among the five states for Tuesday's primary (Pennsylvania, Rhode Island, Connecticut, Delaware, and Maryland), Sanders would have to win big to close the pledged delegate gap – much more surpass it.

Pennsylvania has the most delegates up for grabs, with 189 at stake. Theoretically, if Sanders won all the delegates in Pennsylvania and all the delegates in Maryland (95), he would overtake Clinton's lead in pledged delegates. But Democrats award delegates proportionally, and not "winner-take-all," making that exact scenario unlikely. Also, a NBC News/Wall Street Journal/Marist poll suggests that Clinton is leading in Pennsylvania, so, a sweep like that for Sanders would be tough. (It is important to note, however, that polls show Clinton's lead over Sanders in national polls have decreased.) And then of course, Sanders would still have to fight for support from the superdelegates, or "unpledged delegates" at the national convention in July.

On the other hand, a theoretical sweeping win for Clinton wouldn't knock Sanders out the race, either. Sanders and Clinton need to cinch 2,383 delegates to win the democratic nomination. Clinton can't reach 2,383 delegates after Tuesday, although she could technically get close.

As with previous state primary elections, Tuesday's Northeastern primary race or "Acela primary" has garnered questions on whether Sanders will end his campaign, considering the results. But as Jane Sanders noted today, this is not the first time the Sanders camp has been asked this question. Some media outlets have reported that Sanders will "reassess" his campaign after Tuesday, but Mrs. Sanders, reassured – again, that the Sanders camp is "in it until the convention."

"Since Iowa we have been asked at every election, 'are you getting out now?' No, the answer is no, we're in it until the convention. And, after the convention, if Bernie is the candidate or if he isn't the candidate, the political revolution, trying to transform this country, will go forward."