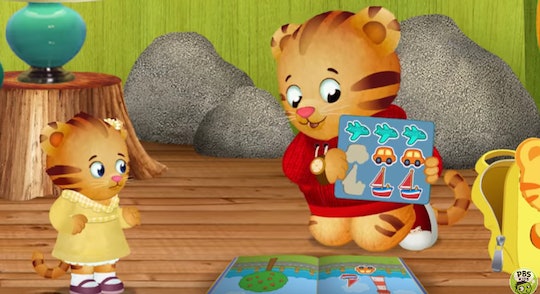 How Old Is Daniel Tiger? Well, He's Been In Preschool For 8 Years

If your kiddo is a big fan of Daniel Tiger’s Neighborhood then you might be wondering: First, how to get those catchy songs to stop playing in your head; and second, how old is Daniel Tiger?

Well, I’m happy to tell you that this question has a straightforward answer: Daniel is 4 years old, according to PBS. This checks out, as Daniel is still in preschool along with his friends Katerina Kittycat, Prince Wednesday, O the Owl, Miss Elaina, and Teacher Harriet.

Time must move in mysterious ways in the neighborhood however, because Daniel’s little sister, Baby Margaret, was born in season two (no spoilers, but he wasn’t a huge fan of her arrival); now, in season four, Margaret has aged into toddlerhood, but Daniel appears to be stuck at age 4. The show premiered in 2012, and almost eight years later, Daniel seems to be basically in the same place developmentally that he was at the show's inception (though he's potty trained now, and a big brother, of course).

Daniel Tiger’s Neighborhood builds on the teachings of Mister Rogers’ Neighborhood, and each episode is designed to teach lessons of empathy, social skills, compassion, and strategies for little kids to handle big emotions like fear and disappointment. Because the show is geared toward ages 2 through 4, it makes sense that the protagonist would be about the same age as the intended viewers, especially because Daniel talks directly to the audience in each episode.

If I'm willing to accept that Peppa Pig is 7 feet 1 inch tall, Olaf is apparently 5 feet 4 inches (which means Elsa and Anna should be in the WNBA) and Baby Yoda is 50 years old, (extremely unsettling news, I know) then I can accept that Daniel has been in preschool for several seasons of the show. Now if only I could figure out why he doesn’t wear any pants.