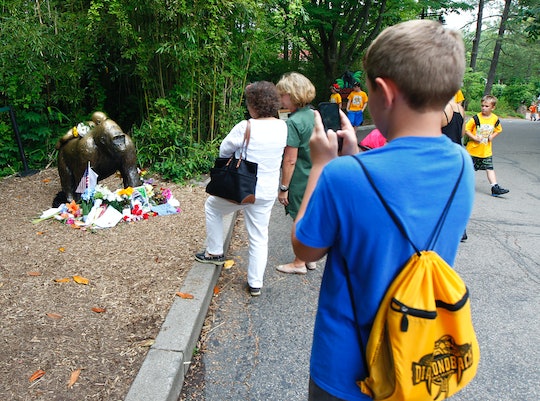 How To Explain Harambe's Death To Your Kid

Visiting the zoo is a favorite summertime activity for kids and their parents across the country, and doing so is so commonplace that it's easy to forget that the lions, tigers, and bears there really are wild, undomesticated animals. And very young children may not understand that these creatures, while fascinating, really do have the ability to seriously hurt — and even kill – humans. One 4-year-old is lucky to be alive (and, miraculously, mostly unhurt) after he got past the protective barrier and fell about 10 to 12 feet into the man-made habitat of a 17-year-old gorilla named Harmabe recently. After the boy had been in the enclosure for about 10 minutes, zoo officials made the controversial call to shoot and kill the gorilla in order to ensure the child's safety. Adults have been grappling with this (and assigning no shortage of blame) ever since, but it's also important to explain Harambe's death to your kid, no matter how dark the topic may seem.

More Like This
Attorneys General In Nearly Every State Oppose Facebook’s “Instagram For Kids” Plan
15 Face Masks For Kids That Are Cute, Comfortable, & Get The Job Done
Here's What Your Kid Is Really Saying When They Tell You They Hate You
The Best Splash Pads For This Summer

According to witness reports, the 4-year-old had reportedly voiced a desire to enter the "Gorilla World" enclosure, and managed to do so despite his mother's warnings not to. As a result, the the internet is aiming hate at the boy's mother for the endangered western lowland gorilla's death, because they believe she did not watch her son as she should have.

It's true that Harambe would still be alive had the mother prevented her child from getting into the enclosure, but some have publicly defended her, saying that even the most watchful parent will inevitably lose track of her kid at some point. For this reason, it's important to explain Harmabe's undoubtedly tragic death to kids through the lens of promoting safety, as well alleviating any fear that the incident may have inspired.

The zoo maintains that the decision to kill Harambe was justified because, although he had not attacked the boy, he was dragging him around, and, weighing in at more than 400 pounds, he posed an imminent threat based on size and strength alone. Kids need to understand that a trip to the zoo is not intrinsically dangerous, but that the animals are separated from the humans for a reason. As long as kids keep an appropriate distance and obey zoo rules, there's no threat to their safety.

So, that means that young kids should be well-versed in zoo safety rules before they make the trip (and parents do, too!). CNN reported that there are several rules families need to follow at the zoo: Do not tease the animals, even behind glass. Never, ever, ever, ever lift young kids onto ledges so they can see into exhibits better. (The importance of this one is illustrated by a 2012 incident at the Pittsburgh Zoo when a mother did this, and her 2-year-old was mauled and killed by wild dogs when he fell into their exhibit.) Make sure kids know that the animals are not bigger versions of their pet kitty cat, but that they are wild and potentially dangerous. Finally, the rule that could have prevented the Harambe incident over the weekend: Make sure kids agree to stay close to parents or other caretakers, and that they know how dangerous it can be to wander off.

At an Omaha Zoo in April 2015, a young girl provoked a gorilla through a glass barrier (breaking safety rule #1), and the ape charged the glass, cracking it:

Kids should also know that while instances of children entering zoo enclosures can happen (especially if they ignore safety rules), it's incredibly rare: Nothing like this has ever happened at the Cincinnati Zoo's Gorilla World in its 38 years, and Vox noted that 1.5 million people visited the zoo in 2014-2015.

Finally, talking about an animal's death alone might seem like a hefty feat, but it's doable. The American Academy of Child & Adolescent Psychology has suggested that parents talk carefully to children under the age of 9, making sure to reiterate that "[when an animal dies], it stops moving, doesn't see or hear anymore, and won't wake up again." The AACAP also notes,

Trying to protect children with vague or inaccurate explanations can create anxiety, confusion, and mistrust. ... Parents can serve as models by sharing their feelings with their children. Let your child know it is normal to miss [animals and pets] after they die and encourage the youngster to come to you with questions or for reassurance and comfort.

Many kids will be understandably upset to find out that their favorite zoo animal was killed, especially those who have visited zoos before and enjoyed watching the gorillas. Exploring those feelings could provide a good opportunity to talk about death in general with kids, and to reiterate that as long as they understand and respect the zoo animals' power, wildness, and right to remain separate from humans (t0 the extend that that's possible, in a zoo), they won't find themselves in a similar situation as the boy in Cincinnati — or place a wild animal in a dangerous scenario.