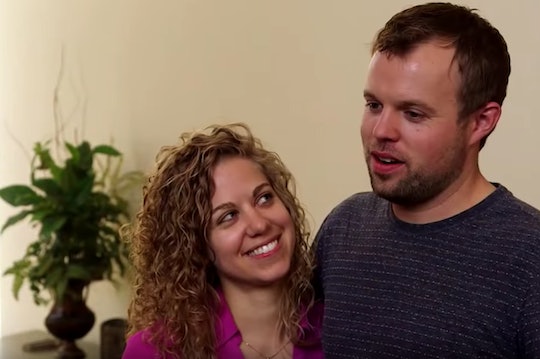 If You're Itching To Rewatch John-David Duggar & Abbie Burnett's Wedding, Here's How

TLC's Counting On is currently off air, much to the disappointment of Duggar fans. But TLC made an exception this week when they aired a special episode of Counting On in honor of John-David Duggar getting married to Abbie Grace Burnett. However, if people missed the episode or want to re-watch the couple's first kiss over and over again, no need to worry. In fact, there are two ways to rewatch John-David Duggar and Abbie Burnett's wedding.

On Tuesday, longtime viewers of Counting On finally got to see the second oldest Duggar son (Josh Duggar takes the title for oldest) get married, and it was a long time coming. The 28-year-old was known for calling himself a "Bachelor 'til the rapture" since he was waiting for the right woman to come along while his younger siblings got married. But when he met Burnett, he knew he wasn't going to be single for long.

"It's been a wonderful transition so far, and I'm not looking back," John-David said during the special.

It's only fitting that this Counting On special focused on the next chapter in John-David and Burnett's lives — their wedding — before they can look to their future. And good news: You can watch their wedding on TLC's website as many times as you want.

Another way to watch their wedding special? By downloading TLC's mobile app, TLC Go, on your phone or tablet. This way, you can watch the special on the go — like when you're waiting in line at the DMV, or need a break during your company's holiday party.

The wedding special was super special for Duggar family fans — and it's not because they got to see the "Bachelor 'til the rapture" finally get married. It's special because fans finally got to get acquainted with Burnett, someone Counting On fans know very little about.

Burnett made her first appearance during the Season 8 finale of Counting On, but even then remained a bit of an enigma. Even the most loyal Duggar fans were surprised by their courtship, which was announced at the end of June. And almost exactly one month later in July, John-David announced that he and Burnett were engaged.

Because this happened so fast, people missed out on their courtship and getting to know Burnett, and luckily, this special filled fans in on everything they had missed. During the wedding special, the couple described their relationship as "romantic" and that she had been "intrigued" by John-David from the start.

But most importantly, this special documented all of the exciting moments that were shared during the wedding and there were a lot of them.

Fans not only got to watch John-David and Burnett share their first kiss, which lasted a total of 45 seconds, according to E! News (thanks to John-David kissing Abbie on her hands and cheeks beforehand). But fans also got to watch their emotional and surprising wedding ceremony, featuring music from John-David's younger brother, Josiah Duggar and his wife, Lauren Duggar. The entire ceremony was so true to the couple and their quirks, which made it such a fun wedding to watch.

It's also possible that this special could air again on TV during the upcoming season of Counting On. When Josiah and Lauren married earlier this year in July, their wedding special was put on TLC's website. But when Counting On finally aired a few months later, they showed an extended version of the couple's wedding. Since there was so much that fans didn't get to see of John-David and Burnett's wedding (like their wedding reception or getaway), it's possible that their future televised wedding will include these details.

But until then, fans can just watch their super cute ceremony over and over again.