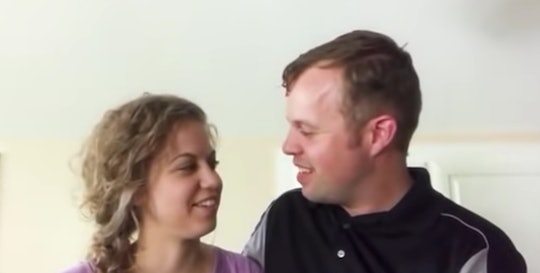 John-David Duggar's Fiancé Abbie Burnett Is From A Small Town, Just Like Him

After John-David Duggar and Abbie Grace Burnett entered a courtship and got engaged, Duggar fans were obviously curious about the soon-to-be newest addition into the super-sized family. And that's mainly because viewers of TLC's Counting On had never been introduced to Burnett before. So, of course, people still have questions and may be wondering, for instance, where exactly Abbie Burnett is from.

Fans of the Duggars — who star on TLC shows like 19 Kids & Counting and Counting On — are well aware that the Duggars are from Arkansas and call the small town of Tonitown home, according to In Touch Weekly. The Duggars have a lot of home state pride; in 2002 dad, Jim Bob Duggar, campaigned be a senator of Arkansas and only one sibling out of the 19, Jinger Duggar, lives out of state.

So, people might be a little surprised to find out that Burnett is not from Arkansas, according to Us Weekly. In her courtship announcement with John-David, Burnett revealed that she is from a neighboring state — Oklahoma. In June, Burnett told Us Weekly that the couple's love blossomed after John-David visited her. "John flew in for a church event here in Oklahoma, where I'm from," Burnett said. "We really got connected then."

But, Burnett did not say where in Oklahoma she is from.

However, Burnett's reported LinkedIn account states that she is from Stratford, Oklahoma. And if you've never heard of it before, don't fret — it's not that big of a town. Stratford has a population of about 1,500 people, according to Suburban Stats. Meanwhile, Tonitown's population is about 2,400, as noted by Suburban Stats. In case Burnett and John-David didn't have much to bond over, they could easily talked about what it's like to grow up in a small town.

Although it would have been convenient for them to be from the same area, location clearly wasn't a factor when it came to Burnett and John-David falling in love. John-David has his pilot's license, and throughout his courtship, he had been flying out to Oklahoma to spend time with Abbie and her family, according to TLC. How adorable!

But distance has clearly never stopped the Duggars from entering in relationships. Jill Duggar's husband, Derick Dillard, had attended Oklahoma State University and was living in Nepal when he first entered a courtship with Jill, according to Us Weekly. And Jinger Duggar's husband, Jeremy Vuolo, was living in San Antonio, Texas when they began courting.

All of the sky miles that John-David racked up visiting Burnett really paid off, because he and Burnett got engaged one month ago on July 25, according to People.

But once John-David and Burnett get married (whenever that may be), it's a little unclear what state (or town) that they will settle down in. As previously stated, there is only one member of the Duggar family who lives out of Arkansas. And, who knows, John-David could very well move out of state once he ties the knot.

Burnett is currently a nurse in Oklahoma, according to The Ashley's Reality Roundup, so John-David could possibly move to her state for her job. But at the same time, Burnett could also move to Arkansas and be a nurse while John-David tends to his very busy schedule — not only is he a pilot, but he owns his own business, and works as a first responder.

It's unclear what state (and town) their marriage will take them to, but what is clear is that Burnett and Duggar are in so love.