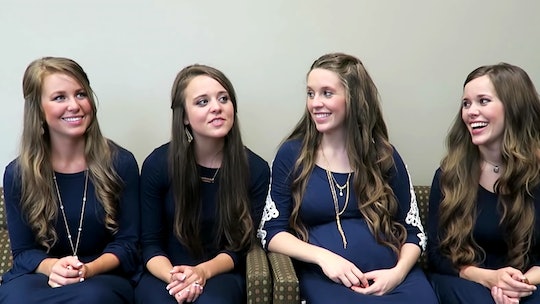 If there's one thing you can definitively say about the Duggar family, it's that there are a lot of them. With 19 children, Jim Bob and Michelle Duggar have raised an ever-expanding family at their large home in Arkansas and keeping tabs on them all nowadays is getting a bit more difficult. So, let's start with a simple question: Which Duggars don't live in Arkansas now? For the most part, the family has kept pretty close to home, but there is one Duggar who no longer lives in their home state of Arkansas.

So, who's the little rebel? Well, most Counting On fans won't be surprised to know that the only Duggar who no longer lives in Arkansas is Jinger Duggar. Yes, Jinger along with her husband, Jeremy Vuolo, currently reside in Laredo, Texas, which is a pretty long drive — about 12 hours — from the Duggar family home in Tontitown, Arkansas.

Although the young couple isn't as physically close to home as most of the Duggars are, it's evident that they're enjoying their new lives in Texas. And as they prepare to welcome their first child into the world, reportedly this July, both Jinger and Jeremy certainly seem to be OK with not being next-door neighbors to the Duggar family.

As for the rest of the adult Duggars who have since married and started families of their own, it appears that they still call Arkansas home.

Now, this isn't exactly the worst thing in the world, though. As the Daily Mail reported, the family actually moved into the "sprawling 7,000-square-foot house they designed and helped to build in January 2006." So, while living with your family in their two-bedroom home when you're 28 might seem miserable, living in your parents' 7,000-square-foot home rent-free when you're 28 doesn't actually seem so bad.

But, even though Jinger is the only Duggar to live out of state at the moment, it was always like that. Josh Duggar and his family previously lived in Maryland, according to the Daily Mail, when Duggar worked at the Family Research Council. But, following Duggar's molestation scandal in 2015 and other controversies, the family moved back to Arkansas to be near the Duggars while Josh went to rehab. At the time, the father of five took responsibility for his actions, according to E! News. Now, the oldest Duggar resides in Arkansas with his family, near his parents, according to the Daily Mail, and bought a home in Siloam Springs, Arkansas, where he lives with his wife and children.

So, that leaves Jinger, the only other Duggar to currently live outside of Arkansas.

After Jinger and her husband returned to the United States from their honeymoon, they moved into their new home in Laredo, Texas, as Jeremy took up a pastoring job there. Speaking to People, Jinger explained that the couple was settling in nicely. "We have just so perfectly adapted, it's been incredible. The biggest blessing." She also told the magazine that she could easily talk to her large family whenever she started to feel homesick. "We FaceTime, and there’s always a family group message sharing what’s going on. It’s been joyous."

So, even though Jinger may be the odd man out in terms of living arrangements, it's clear that she's doing just fine and loving her life in Texas.