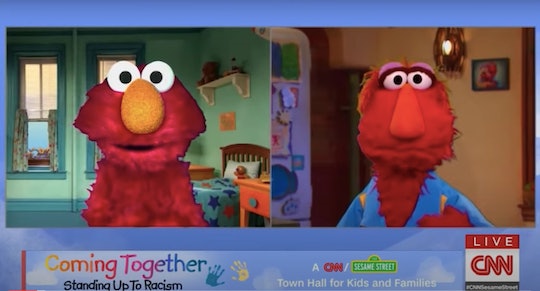 How To Rewatch 'Sesame Street's Town Hall On Racism, Protesting & More With Your Kids

Conversations about racial inequality, privilege, and bias are necessary, but they aren't always the easiest to have with children. So when you need some assistance, you can always rewatch Sesame Street's town hall explaining racism to kids with help from Elmo, Big Bird, and more.

Over the weekend, CNN's Van Jones and Erica Hill teamed up with the lovable cast of Sesame Street to help explain why millions of people are protesting right now and taking a stand against racism. And, fortunately, you can watch Coming Together: Standing Up Against Racism on CNN's website and on CNN's app CNNgo right now for free.

In the special, Elmo asks questions that your own children may have asked. "Daddy, Elmo doesn’t understand. What’s happening, why are these people together?" Elmo asks his dad Louie while watching people marching together. "They're gathering together to protests," Louie responds. "... People are upset because racism is a huge problem in our country... Racism is when people treat other people unfairly because of the way they look or the color of their skin."

Louie goes on to explain that although there may be "sunny days" where Elmo and Cookie Monster live, "not all streets are like Sesame Street." "On Sesame Street, we all love and respect one another," he tells Elmo. "Across the country, people of color, especially in the Black community, are treated differently because of the way they look, their culture, race, and who they are. What we are seeing is people saying 'Enough is enough'. They want to end racism."

For the past two weeks, millions of people, including children, have been attending Black Lives Matter protests across the country to demand justice and change following the killing of George Floyd, a 46-year-old Black father who died after a police officer knelt on his neck for nearly nine minutes.

Even if kids aren't at protests, Atlanta Mayor Keisha Lance Bottoms encouraged young viewers during the CNN/ Sesame Street town hall to "lead by example" and "keep loving each other and when you see someone who is doing something wrong or saying something wrong, say that it's wrong."

In typical Sesame Street fashion, the town hall tackled difficult topics and broke them down in ways kids can understand, like why it's important to say Black Lives Matter and the unfair realities of white privilege. "The most dangerous kind of white privilege is to think we can sit this justice struggle out," Jennifer Harvey, a religion professor at Drake University, said during the town hall. "This struggle won't be over in two weeks."