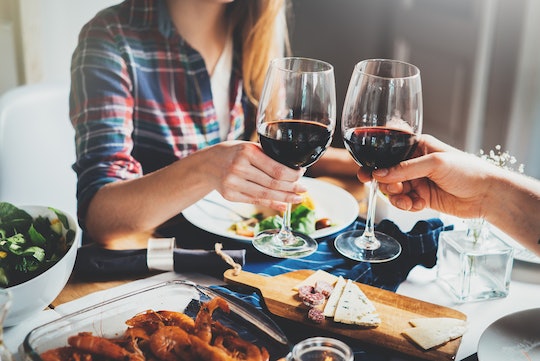 Families and friends will soon gather around Thanksgiving tables across the country. Since many of those celebrations will inevitably include glasses of wine at dinner, beers during the game, or other libations, parents might find themselves having to explain drinking to their kids, possibly for the first time. It's natural to wonder the best way to have this conversation, especially if you have to talk to your kids about someone who drinks too much, to prevent them from feeling scared or confused about the experience, and set a good example.

To find out more about how to have difficult conversations with kids about alcohol use, Romper spoke with Omaha, Neb. licensed social worker Elena, O'Connell, MSW, and Ohio-based therapist Amanda Marotz Roemer, LMHP, LPC via email. As a family social worker and mom, O'Connell thinks important to frame adult activities — like swearing, and drinking — as only appropriate for adults. She told Romper that seeing an adult do irresponsible things, like drinking to excess, might actually be a teachable moment about boundaries and safety. As a mom who enjoys the occasional drink, Roemer agrees, telling Romper that there's nothing wrong with you or someone else drinking in front of your kids, if you model good behavior. If that fails, and someone does get drunk, you should be honest with your kids about what's going on, and add a safety message about not drinking and driving for good measure.

O'Connell notes that talking to your kids about alcohol is not as simple as telling them that drinking is bad or not to do it. Being clear about what sorts of things are acceptable for adults, but may not be acceptable for children, establishes boundaries," she says. "It also gives you an opportunity to talk to older kids and teens about when it is appropriate to do those activities."

As awkward as having a drunk relative on Thanksgiving can be, O'Connell adds that the situation might actually provide you with a lesson for your kids about far more than alcohol. "It's important for kids to learn that people get to make choices about their own bodies. Sometimes those choices aren't very healthy, or we might not do them ourselves, but it's still their choice," she writes.

Roemer agrees that it's important to be honest with your kids about alcohol use. She writes, "If they see someone drink to the point of impairment, use that as a learning experience. Intervene, take away the keys, and help impaired drivers find alternate transportation." adding, "it's a good time to also let your kids know that if they ever have too much to drink or are with someone who has, they can call you for a ride, no questions asked."

All of this might make you wonder if it's OK to drink in front of kids, period. As Roemer tells Romper, "There is nothing wrong with having a drink in front of your kids. As you do so, though, remember your kids are watching." She adds, "They will pick up on what you're like when you're drinking. So, model the type of drinking behavior you'd be okay with them having."

Licensed psychotherapist Mayra Mendez, PhD, LMFT agrees that it's not necessary to abstain from alcohol use, as long as you take care to do it responsibly. As she told Healthline, if you, yourself, choose to drink at Thanksgiving, you should limit the number of drinks you have and make arrangements for a designated driver. According to Mendez, it's super important that you don't frame alcohol use as entirely bad. Because chances are, your child will eventually drink alcohol, or encounter people who do, socially, or in professional settings.

When it comes to drinking themselves, being exposed to responsible alcohol use might actually help kids learn how to drink safely in the future. A 2016 study in the journal Psychological Medicine and published on Cambridge University Press found that kids whose parents drank and let them drink at home, drank less and were less likely to engage in unhealthy drinking behaviors, like binge drinking, than those who got it from their friends, which may indicate that being open with your kids about alcohol and modeling safer consumption might actually be a good thing.