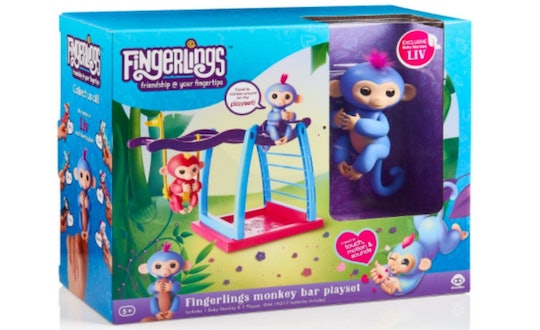 Here's How To Tell If Your Fingerlings Are Fake

It's official: Fingerlings are officially the hottest toy of the season, which means they're likely going to be sold out at most stores and outlets soon. Because of all the demand for the adorable robotic monkeys, you might find yourself trying to buy one for your kids online, so you're definitely going to want to know how to tell if your Fingerlings are fake or not so you're not getting swindled on the internet. Hey, it happens.

In case you've somehow missed it, Fingerlings are made by WowWee and they're little interactive monkeys that move and make noise when you touch them. You can make them giggle when you hang one upside down or smile when you pat its head. If you really know what you're doing, you can even make it burp and fart. Ah, just what your kids' playroom needs. There's an original set of six, that come in different colors and have their own cute names, like Bella, Zoe, and Sophie.

Later this fall, WowWee is releasing a set of Glitter Finglerings and a sloth exclusively from Amazon. Toys "R" Us is selling an exclusive unicorn version, too, named GiGi. The one good thing about figuring out if your Fingerlings are the real deal or not is these exclusive deals — if you hear someone say they got their GiGi the Unicorn through any other channel than Toys "R" Us, you know something's off.

But that doesn't mean third party sellers on Amazon or eBay won't try to sell you fake ones. When you're shopping on Amazon, make sure you're shopping from the official WowWee store. Right now, there are waitlists for Fingerlings as they get back in stock in stores like Target, Walmart, and Kmart (all official retailers), but you shouldn't be paying too much over retail for them yet. Here's how to make sure you're getting the real thing.

The regular ones sell for $14.99 and the Amazon exclusive rose glitter Fingerlings sell for $17.99. Some re-sellers are shilling them for $20, but anything higher than that might be a red flag. An even bigger red flag is if you find Fingerlings for anything under $14.99. It goes against your best instincts, but manufacturers pretending to sell real Fingerlings might just be trying to get rid of their robotic monkeys as fast as possible — hence pricing them lower than the manufacturers' suggested retail price.

GiGi the Unicorn is a pre-order, as are the Glitter Fingerlings. So you shouldn't be able to get one in the mail anytime soon. Beware any seller who claims to have some in stock. (And remember, the unicorn is for Toys "R" Us only.)

Make Sure It's WowWee

The listed manufacturer should be WowWee, not anything else. So when you're shopping, ensure that that's what the box says if you find them out in the real world. And that WowWee is listed as the manufacturer in any online shop. You can scroll down to the reviews and questions on Amazon, and see if other people have commented on their purchases. User reviews of a seller on Amazon are a good way to know what's up.

Other than shopping smart, you'll likely know just by the look of your Fingerling if it's a fake. And if it farts, laughs, and plays just like the other ones and your kids can't tell, it might not seem like the end of the world, but the fake ones might not be as safe to "monkey around" with as the authentic ones. So be careful not to get swindled out of your money and kids' safety while shopping online this holiday season for the hottest toy.

More Like This
Patrick Mahomes & Brittany Matthews Reveal They're Expecting A Baby Boy In Sweet Video
Is It Safe To Keep Using Period & Fertility Apps In A Post-Roe America?
Some Movie Theaters Are Banning Teens Dressed In Suits As Part Of Viral 'Minions' Trend
12 Of The Best Hallmark Christmas Movies To Watch In July