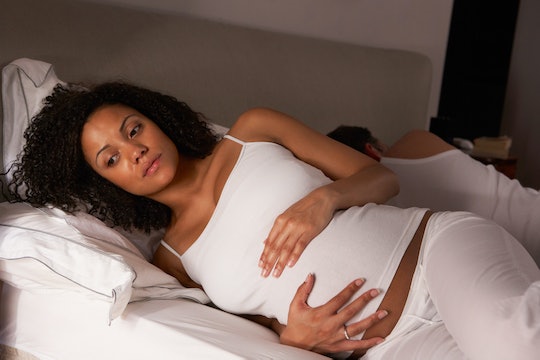 After Republicans in Congress failed, numerous times, to gut the Affordable Care Act, President Donald Trump has decided to take matters into his own hands. In a show of hypocrisy, Trump signed an executive order on Thursday to change the ACA in a number of key ways that would undermine former President Barack Obama's health care reform, known disparagingly as Obamacare. Once in effect, the order will undoubtedly have the most impact on women, people with disabilities, people of color, and families with low incomes. But how exactly will Trump's Obamacare executive order affect pregnant women? Many of them could kiss maternity and newborn care goodbye.

Trump's executive order would ultimately let insurance carriers sell thinner plans at cheaper prices, according to the New York Times. That includes expanding consumer access to association health care plans, in which groups of small business come together to buy bulk health insurance and sell to their members. The order would also loosen standards for short-term medical coverage sold to individuals and families, the New York Times reported.

Under Trump's executive order, association health care plans would be exempt from key Affordable Care Act provisions, according to financial and investment website the Balance. That means these policies would not have to cover ACA's essential health benefits — including maternity and newborn health care.

Before the Affordable Care Act, insurance carriers weren't required to cover maternity care. In fact, more insurance companies didn't provide maternity care as a policy option. But, under the Affordable Care Act's 10 essential health benefits, maternity health care became accessible and affordable for all new parents, no matter if you have private insurance or are enrolled in Medicaid. Among other benefits, the ACA required insurance carriers to cover breast-pumping devices and support, and employers must provide a lactation room to chest-feeding parents that isn't a dirty bathroom.

Trump's executive order threatens these necessary health benefits, among other provisions, for many parents across the United States. The order, once in effect next year, could also allow association health plans to reimpose lifetime and annual limits, according to the Balance.

How do lifetime and annual limits hurt new and expecting parents? As Vox explained, a lifetime cap allows insurance companies to limit the amount of benefits a policy holder could receive. Before the Affordable Care Act, caps were often set at $1 or $2 million; go over that amount, and your benefits expire. For many parents, a lifetime or annual cap could mean endangering their children's health, particularly if their child is battling a serious and life-threatening condition.

Trump's executive order may fulfill his campaign promise of destroying the Affordable Care Act — in turn, Republicans what they've wanted for the last seven years. But it also will destroy the lives of millions of Americans, including pregnant women, who depend on the access to health care the ACA afforded them. For a president who wants to make America great again, he's sure doing a terrible job.