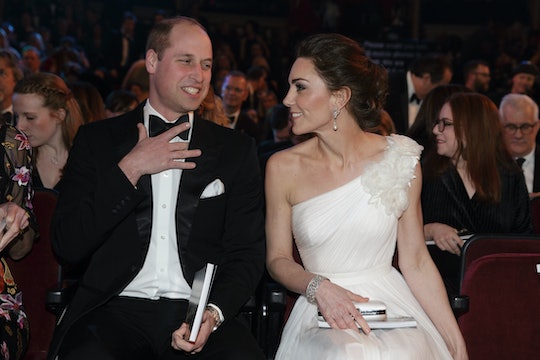 They're probably the most glamorous couple in the world, but Kate Middleton and Prince William, for all their privilege, don't seem — from the outside looking in, at least — to get a lot of alone time together. So how will Kate Middleton and Prince William celebrate Valentine's Day this year? The royal lovebirds are keeping any plans under wraps, but I'll do my best celebrity sleuthing to find out if there will be any flowers, chocolate hearts, or fancy dinners out.

As Town & Country reported, while there are no definite answers yet re: the Duke and Duchess of Cambridge's schedule on the big day, there is a definite royal precedent for putting professional duty over personal lives.

The Duke and Duchess of Sussex, for example, otherwise known as Prince Harry and Meghan Markle, are not spending Feb. 14 together, the magazine confirmed.

Harry will be in Norway as part of his position as Captain General of the Royal Marines, Town & Country noted, while a pregnant Markle will either get a rare day to chill or show up for a yet-to-be-confirmed royal engagement.

As for Kate and William, however, they are really a bit of a mystery.

On one hand, you know everything about them, from seeing a copy of their holiday card, to knowing all about their kids and Kate's recent wardrobe choices (A gorgeous white Alexander McQueen at the BAFTA's, as per Hello!).

On the other hand, they keep a pretty low profile when it comes to the nitty-gritty of their personal life.

No one knows, for example, exactly how they juggle families at Christmas, and there has been speculation that Halloween (not a totally British, or royal, "thing") is observed on the super-down-low at Kensington Palace.

This super-sensible approach to sentimental occasions such as Valentine's Day may well come from Queen Elizabeth, who does not believe in lavish Christmas gifts, for example, and does not encourage holiday overeating, according to Marie Claire magazine.

So as for what Kate and William are doing specifically this Valentine's Day? Well, it may not be the romantic answer you would like because for past sentimental holidays and other special days, they were confirmed to be apart. Kate's first V-Day as a royal? Oh, William was in Argentina for military training.

Her magazine also noted that on Kate's 37th birthday, the Prince was flying helicopters over London as part of his charity work, not making her pancakes. (Of course, he could have squeezed in a late dinner back home, or like most parents I know, maybe they had to wait until the weekend to get out for a meal.)

And V-Days of years past, the two went their separate ways for the day. Grazia magazine noted that in 2017, the romantic holiday was marked by Kate visiting a Royal Air Force base away from London.

Still, before you go freaking out, remember that all these years in, Kate and William have hit that "mature love" stage, where a duo is solid in their relationship together, but well beyond excessive butterflies in the stomach or over-the-top PDA.

And pics of the future rulers of England show them often taking that extra second to catch the other one's eye for a little private joke, or putting their arms around each other.

I bet a million bucks these two will find a second to celebrate the big day, even if it's just a late-night spoonful of ice cream after George, Charlotte, and Louis have finally gotten to sleep.

Sometimes, in such a busy life, a stolen moment together rekindling that original spark is all you need to remember the preciousness of enduring love.

And that's better than heart-shaped candy any day.

More Like This
Barack Obama Is Apparently A “Big Article Sender” In The Family Group Chat
Andy Cohen's 3-Year-Old Son Ben Has Officially Taken Over An Important Hanukkah Tradition
Meghan Markle Spent Her Thanksgiving Volunteering For A Cause Close To Her Heart
Ryan Reynolds' Daughters Have Watched 'Elf' Thousands Of Times, Just Like The Rest Of Us