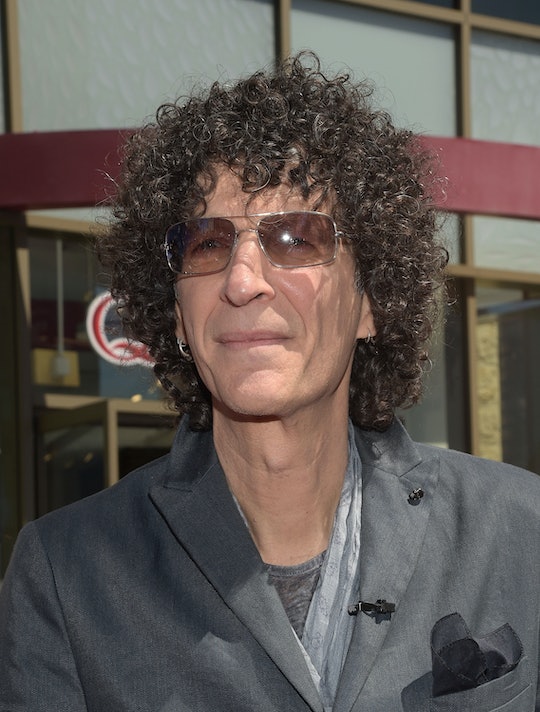 Donald Trump and his wife Melania seem to agree that the his remarks on a hot mic in 2005, like laughing about grabbing female genitals without their consent, were just "boy talk," but not everyone in media agrees. In a sort of surprising twist, shock-radio host Howard Stern doesn't agree with Trump's "locker room" talk defense at all, even though he and the presidential candidate are seemingly friends (or at least well-acquainted). On Monday, Stern addressed the leaked 2005 Access Hollywood tapes on his radio show, analyzing the Republican nominee's conversation with host Billy Bush about kissing and groping women when he meets them because he's a star.

If Howard Stern thinks Trump's comments are inappropriate, American voters still on the fence about the comments might want to perk their ears up. This is a radio host who has made an entire career off of what Melania herself has claimed is just "boy talk." Still, Stern isn't buying the official defense about "locker room talk."

"Believe me, when I’m around guys, 85 percent of the time you’re talking about pussy," Stern said on his show this week. "But I have never been in the room where someone has said, ‘Grab them by the pussy.’”

So, there you have it, America: Even Howard Stern has never thought to enter into a conversation where someone, let alone a potential president of the United States, would use such graphic references.

Stern added that he does understand what Trump meant by "locker room" talk, in general. But the radio host doesn't understand how comments so lewd could be lumped in with men whining about women in the privacy of a stinky locker room. “Locker room talk to me is guys are either talking about who’s hot, or either what they’ve done to chicks or what they’re hoping to do to chicks,” Stern said. “A lot of [locker room banter is] real kind of desperate talk. The reason it’s in a locker room is because no one’s proud of it," he added.

But The Donald didn't seem very desperate or ashamed at all on those 2005 tapes or during his apology in the days following the leak. If anything, the candidate puffed up his shoulders and defended his banter with Bush by employing the old "boys will be boys" reasoning. His wife, Melania, did the very same thing on Monday night during an interview with CNN's Anderson Cooper. She told Cooper that she felt like sometimes she lives with two "boys," her 10-year-old son and her husband. Melania added that she felt her husband was talking to Bush like a "teenager." Cooper interjected that Trump was not a teenager but a 59-year-old man at the time of the hot mic recording.

Don't get too amped up about Stern's tough stance on Trump's comments just yet, though. The radio host and the Republican nominee go way back and there are apparently a lot of archived interviews that aren't super easy for reporters to comb through (although some have done the legwork to find out what Donald Jr. has been saying on-air). Stern isn't going to make it easy for the media either, whether he thinks the "locker room talk" defense is valid or not. Stern said that he won't replay all of his old Trump interviews, even though they weren't private conversations. So what gives, Howard? He said on Monday:

Why don’t I play all the tapes? I have to tell you why: I feel Donald Trump did the show in an effort to be entertaining and have fun with us, and I feel like it would be a betrayal to any of our guests if I sat there and played them now where people are attacking him.

Ah, yes, the old "I can't reveal my sources" line. But that's kind of a cop out. In this case, it wouldn't be unethical for Stern to play all the recorded Trump conversations over the years, since they were all public to begin with. If anything, by releasing or playing all of the Trump interviews, Stern would be making it easier for voters to hear the "boy talk" the two men engaged in, with Robyn laughing along of course. By not replaying the interviews, Stern's only blocking voters from hearing a silly call-in segment Trump might have done in say, the early '90s. And really, if it's just "boy talk," what's the big deal? Trump can't be afraid of transcripts, can he?

Let's level with each other: given what most Americans can remember and know about Trump, it's likely he said something absurd or offensive in each and every one of his Howard Stern interviews. So, not playing the tapes is a personal choice on Stern's part, not necessarily a noble one. Anyone on the fence about Donald Trump and also a fan of Stern's should think nice and hard about what that means.