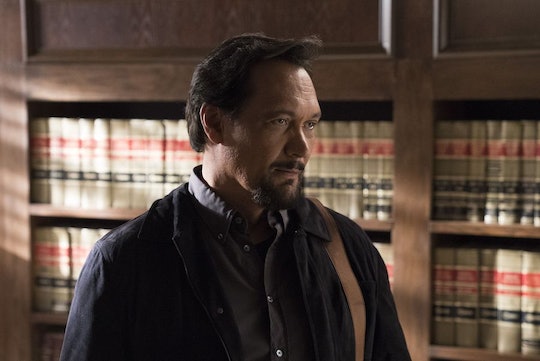 These 'HTGAWM' Theories About Annalise's Therapist Will Blow Your Mind

Now that the latest bombshell about Annaliese's therapist was dropped on How to Get Away with Murder and we know he has a tragic story of his own, it’s time to ask a handful of new questions about him and his family. So naturally, all of the latest HTGAWM theories about Annalise’s therapist are all but necessary in trying to explain everything about Isaac’s mysterious past that’s just gotten more interesting.

In the recent episode "Stay Strong, Mama," we finally learned that the therapist who Isaac's been going to see is actually his ex-wife and that, similar to Annalise’s experience of losing her baby, they lost their own daughter, though it’s still not clear yet how or when she died. But if fans weren't already asking tons of questions about Annalise’s court-appointed therapist before, there are definitely some concerns about him at the moment, especially since he obviously plays some part in this season's flash forward.

Treating Annalise and learning about her history not only with Sam but with her students and Bonnie seems to have been something of a trigger for Isaac, but until now, he didn’t seem to know much about her, so I think we can rule out that he had a secret plan right from the start. But it’s still very possible that Isaac has ties to Annalise in another way, even if neither of them know it yet, and some solid HTGAWM theories about Isaac and Annalise definitely play on that idea. Such as...

Even though it was Isaac’s wife who gave him the advice of how to get Annalise to open up to him about the loss of her baby, she doesn’t seem like she’s been totally honest about her thoughts regarding his professional relationship with Ms. Keating. Sure, she’d advised him to step down as her therapist, but when she showed up at Annalise’s hotel room to talk to her, that seemed just a bit unethical. What is she up to?

His Daughter Died Because Of One Of The Keating 4

This theory about Isaac might be reaching, but it does sort of explain why Asher is in jail in the flashforwards and how Isaac and his ex-wife would tie into everything. According to Redditor routismpar’s theory, Isaac’s daughter could have been the girl that Asher admitted to watching the rape of when he was in a fraternity. Since we know that the girl committed suicide after the rape and Isaac’s daughter obviously died tragically, it’s a possibility that it could have been the same girl. Or, at the very least, someone involved in a similar crime that may have taken place off camera.

He Was Also Wes’ Therapist

TVGuide's description for Episode 8 "Live. Live. Live," says that "Annalise is confronted with disturbing news involving one of Isaac's patients that puts her sobriety at risk. Meanwhile, the investigation into Wes' murder comes to a head, and the details involving Laurel's baby are revealed." I don’t think we ever found out who Wes called when he was in Annalise’s house before the Season 3 fire, but we do know that it was an emergency contact and that he was referring to himself by his birth name.

As hard as it is to believe, Isaac is almost as mysterious as he was when he was introduced at the beginning of the season. At least now we know that not only does he also have a past shrouded in tragedy, but that he and his ex-wife might have more to do with Annalise than we originally thought.