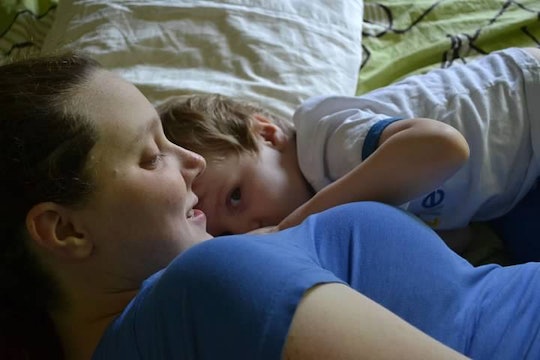 I Breastfed During Labor & I Can't Wait To Do It Again

Tandem nursing isn't easy. Especially when you're pregnant and your milk has dried up and your breasts and nipples are so sore you have to grit your teeth every time your child latches. I breastfed my oldest for four years. For one of those years, he was breastfeeding alongside his little sister. And I even breastfed during my labor. Of course it wasn't always easy, but breastfeeding him during labor and immediately after the birth are memories I will cherish forever.

Now, pregnant with a third baby, I've found myself in this situation once again. I'm in my second trimester of pregnancy and my breasts hurt so much that taking my bra off at the end of the day is basically torture. I haven't had milk in weeks and my breastfeeding sessions with my daughter are basically just to comfort her if she gets hurt or if she's about to fall asleep. I don't think she needs to breastfeed anymore. If I decided I needed to stop tomorrow, I'm sure she'd be fine with it. (Which is much different from my son, who was so attached to breastfeeding that I couldn't imagine weaning him without it being traumatic for both of us.) But as long as she still asks, I'll continue. And maybe, I'll have a great experience breastfeeding her in labor like I did when she was being born.

This was always seen as an invitation to breastfeed for my son, so, quite predictably, he climbed right up into the bed with me.

As a mother of one child who was expecting her second, I felt a lot of things coming to an end in my last few weeks of pregnancy. In a way, I was losing every last bit of my son's babyhood. He was almost 3, but still a baby to me. It wasn't until I saw him next to his baby sister that it really hit me how grown he was, how he had lost all the baby smells and how his skin was no longer as soft, how he didn't need me for nearly as many things as he did before. I treasured our one-on-one time, knowing that those moments would soon become scarce. And I especially treasured breastfeeding him. In those moments where he'd curl around my very pregnant belly and I'd run my fingers through his curly hair, I knew how fleeting those moments were.

When I woke up one morning in labor, I was excited. I spent the first hours of gentle contractions cleaning and eating good food and preparing for my home birth. My mom came over and together, we vacuumed. My partner made a coffee run. We were all abuzz with excitement and anticipation. My son donned his "Big Brother" t-shirt proudly while I made phone calls to my midwife and my birth assistant. Labor wasn't too intense for me yet, so I promised just to keep them updated.

I believe this final breastfeeding session with him as my only baby sent me into serious labor.

Once the initial excitement had died down and my room was all set up with my birth supplies and the bed was freshly made, I laid down to relax. And this was always seen as an invitation to breastfeed for my son, so, quite predictably, he climbed right up into the bed with me.

After he'd crawled into the bed and was comfortable, we just snuggled and breastfed. I breathed through my contractions, which were becoming increasingly stronger. Breastfeeding and nipple stimulation release oxytocin, which is the hormone responsible for causing contractions. If labor is going slowly, that is one way to speed things up. And for sure, I believe this final breastfeeding session with him as my only baby sent me into serious labor.

I knew in that moment how special that last breastfeeding session was. My partner came in an took a few photos, and I'll always cherish them. It was bittersweet when he was done. I sat up and I could feel that my body was flooded with hormones. My eyelids felt sort of heavy and I had that calm feeling I associate with endorphins. My contractions were really fairly strong and close together at this point, so I called my midwife again and she agreed it was time for her to come over.

He saw that she was breastfeeding, and he wanted to as well. I wrapped my free arm around him and he started breastfeeding. But instead of gazing up at me as he usually did, his attention was on his new baby sister. He reached across my chest to hold her hand.

As my labor progressed and got more intense, my son was in and out. He offered me mints when I was feeling nauseated. He rubbed my forehead as I had shown him how to do when I was having contractions. It was all a very special time.

Once my daughter was born a few hours later, the moment came for my son to come in and meet her. He was so reverent and sweet and wide-eyed. He saw that she was breastfeeding, and he wanted to as well. I wrapped my free arm around him and he started breastfeeding. But instead of gazing up at me as he usually did, his attention was on his new baby sister. He reached across my chest to hold her hand.

The rest of the afternoon and evening was spent snuggling and feeding and doing all the things new families do. It was so wonderful for me that my first baby still got to be part of that experience. He's an amazing and nurturing big brother. I don't know for sure if the fact that he got to breastfeed along with his baby sister contributed, but it surely helped with any jealousy issues.

I loved the time I spent tandem breastfeeding my two children, but nothing will ever top those sweet moments that I nursed him while I was in labor. I loved that he was a part of the labor and birth. I loved that something that was so commonplace and part of our everyday could actually help my labor along. I loved that I had those moments to really bask in his last few hours as my baby. I don't know if my daughter will continue to breastfeed in these next few months, but if she does, I know I have beautiful moments ahead no matter what.