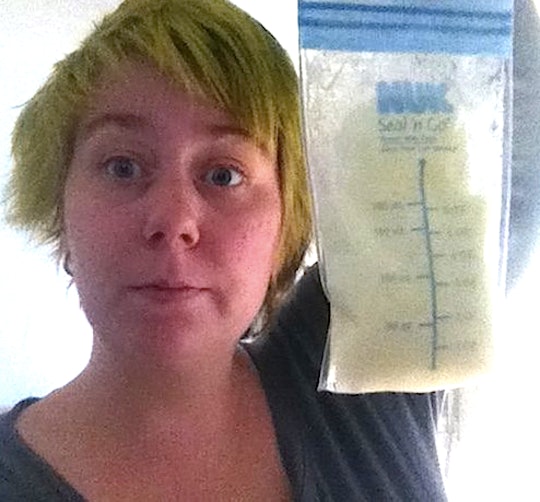 You guys, I think lactating is one of the coolest things around. I absolutely love being a mammal, and when I had a baby, I was seriously stoked about being able to feed him with my own body. I was determined to breastfeed, and after some hiccups in the beginning, I managed to get quite good at it. But beyond nursing itself, the actual milk was fascinating to me.

Why is it that adult humans will drink cow’s milk — which comes from a cow’s breasts — but would never dream of consuming human milk? The idea of consuming breast milk makes people seriously squeamish, and I find reactions to breast milk interesting and sometimes ridiculous. I’ve had people tell me that they wouldn’t be comfortable touching dishes that had once contained my breastmilk, even if they had been thoroughly washed, and say it as if they were describing something illicit and filthy. But breast milk isn’t filthy! So, I set out to cook with breast milk, and see how it worked and how I actually felt once I was doing it.

The rules were pretty straightforward. Each day, for seven days, I’d incorporate my own breast milk into one of my daily meals. Some of the days I ate my “boob food” alone, but other days, my wife and son (he’s 9 months old, and still getting plenty of milk around the clock) joined in. My wife knew that the experiment was taking place, so there were no surprises on that front And since my son is fed exclusively with breast milk, I didn’t really think I’d need to coax him into anything.

We gave it a week, seven different recipes, and here’s what happened:

For my first breast milk meal, I decided to focus on breakfast. Start at the beginning of the day, right? If you’ve watched the Rikki Lake Breastmilk documentary, Breastmilk — The movie, you probably remember the scene at the end where there is a woman making herself an omelet, and she just casually squirts a little milk right out of the boob into the bowl of eggs. I found it fascinating, and decided I kind of wanted to be her. The whole thing seemed kind of badass and impressive! However, there was only one problem: I hate eggs.

So I decided to go easy on myself for day one, and just squirt some milk into a bowl of cereal. It seemed like a great idea, except it turns out that despite having a really high milk supply, getting enough milk for a whole bowl of cereal is work, and work that should probably be done with a pump rather than hand expression. It took me a bit (my rice krispies snap, crackle, and popping the whole time) to even decently moisten the cereal. I did not feel tough or impressive at all. In fact, I just felt slightly embarrassed (even though I was alone) and tired of squeezing my boobs. By the time I felt like I had more than a few drops, some of the cereal was soggy, some of it was still dry, and all of it was pretty gross. To be honest I didn’t even notice the breast milk flavor… but breast milk right out the tap is warm and it turns out that cereal with a small amount of warm milk is totally not my thing, but your mileage may vary!

Boxed macaroni and cheese is one of those foods that I absolutely love, but I’m too crunchy to be totally comfortable feeding it to my son. That said, it seemed like a really, really, easy food to sneak a little boob juice into, so I figure why not. Having learned my lesson from the cereal experience (I am not omelet mom, no matter how badly I want to be) I pumped in the morning, and made the mac according to the package directions, but with breast milk, obviously. My wife was home, so I roped her into eating it with me.

It tasted 100 percent normal — that is to say: absolutely cheesy and delicious. We seriously could not detect any difference at all, even though we were on high alert for it. I guess if I had breast milk, but no other milk, I might even do this one again in the future.

I have a soft spot for vegan baking, and I particularly like any recipe by Isa Chandra Makowitze. So I decided to try one of her vegan cake recipes, and substitute my own milk for the non-dairy milk the recipe calls for. I’ve made this recipe so many times, and I’ve tried all kinds of weird substitutions, and it always turns out great. I could seriously make it in my sleep. Or at least… I thought so?

I had to halve the recipe because I was a little short on milk, and I think I may have messed up my math somewhere. Either that, or breastmilk is really really different than all of the milks I have used in the recipe in the past (almond, soy, rice, and dairy milk). Or maybe it was the fact that I used brown sugar instead of regular? I’m terrible at following recipes, it turns out. Point being, the dough didn’t really rise.

I was disappointed, until I tasted it. It was actually really, really good, you guys! Like, really good. Like, would-make-again good. My wife, who is not usually nuts about sweets, referred to it as “the boob cake” and even had a second piece. It may have been closer to a blondie than a cake, but it was totally edible and tasty.

Day four was easy. I was going to use the milk to make a smoothie: one banana, a big scoop of peanut butter, a dash of cocoa powder, and spoonful of honey. And of course, milk. In this case, my milk. I really really like smoothies, and this recipe is simple and tastes like fancy chocolate milk but also has enough protein and fruit in it to stop me from passing out midmorning. It didn’t seem like anything could go wrong.

But unlike the mac and cheese, the smoothie just tasted really, really different when using the breast milk. Something just seemed sort of, well, off. I kept trying to convince myself that I liked it and it was fine, but hours later, half of it was still on my table and I’d moved on to playing with the baby without finishing my snack. And that never happens — I love snacks!

I’ve been trying to put my finger on what the difference was, and I think it almost reminded me of goat’s milk? Which, I actually like goat’s milk in some things, but I’ve admittedly never tried it in a smoothie. I was kind of a bummer, because it was the last banana in the house, too. C’est la vie!

I make a few different versions of this potato soup fairly regularly, without a recipe, and based on what we have in the house. I was looking for dinner items that could easily incorporate breast milk, and this one seemed like an obvious choice. My wife lingered around the kitchen saying things like, “You’re going to put boob juice in the soup, aren’t you?”

I thought it was pretty good, but my wife and son were all over this soup! I couldn’t believe it. I think I was starting to feel kind of weird about consuming my own bodily fluids every day (and maybe a little skittish after the smoothie incident), but they had no such hang ups and just completely demolished it. Now, I could be that I just happened to spice the soup exactly right. However, I’m going to choose to believe that it’s actually just that my breast milk is delicious and magical.

It’s just totally bizarre to be eating dinner and think “oh, yeah, and part of this came out of my own body.” It didn’t gross me out, but I couldn’t pretend that it felt normal and ordinary, no matter how hard I tried to.

I read maybe half a dozen creamy salad dressing recipes, but didn’t like any of them, so in the end I decided to experiment and take a chance. I mixed up some sour cream, breast milk, garlic powder, basil, and rosemary, and a dash of salt. Then I put it on a salad. The good news is it was literally delicious! It mostly tasted like garlic, which in my book is a very good thing. The bad news is because breast milk is quite thin, this dressing turned out less creamy, and more the consistency of normal full fat cow’s milk.

I was starting to have a really hard time finding creative dishes that I would typically put milk in in the first place, because I guess I don’t cook with that much milk! Honestly, for my grand finale, I wanted to make cheese. Breast milk cheese has always fascinated me as a concept, and I made paneer once, years ago, and it seemed like a challenge I was up for. But it just wasn’t doable. Most of the recipes call for eight full cups of milk, which is 64 ounces. I didn’t have a freezer full of milk just waiting to be thawed, I was pumping as I went for these recipes! And 64 hand-expressed ounces of milk just for cheese? That was just not going to happen.

So I made this casserole instead. I didn’t notice anything odd about it, and I think that much like with the mac and cheese, the other flavors masked any weirdness that might have been there.

The biggest thing that I learned is that I don’t cook with all that much milk, but when I do I almost always use more than a couple of ounces. It seemed like I was constantly wondering if I would have enough milk for whatever was next, and I normally feel like I have plenty of milk! But my son nurses often and in small sessions, which is a different thing than trying to get a certain amount out with a pump, before dinnertime.

I also realized that, even though I’m an extremely weird person and kind of liked the idea of consuming breast milk, doing it regularly actually did totally weird me out. I can’t even put a name to the feeling, it’s just totally bizarre to be eating dinner and think “oh, yeah, and part of this came out of my own body.” It didn’t gross me out, but I couldn’t pretend that it felt normal and ordinary, no matter how hard I tried to.

Cooking with breast milk was OK, but I probably won’t be doing it again.

More Like This
Abbot's Formula-Producing Plant Can Reopen In As Early As 2 Weeks — Now What?
Ashley Graham On The “Fun, Organized Chaos” Of Raising Twins
These Stepmother's Day Instagram Captions Are Straight From The Heart
Stepmom Quotes & Sayings For Every Occasion