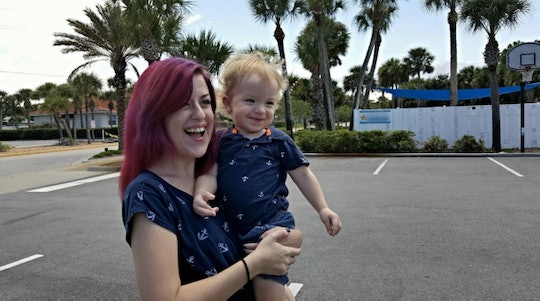 I Corrected Everyone Who Mispronounced My Son's Name

In a time when celebrities give their children names like Pilot Inspektor and Bodhi Ransom, you’d think unique names wouldn’t be so shocking anymore. Yet people still get a kick out of playing games like “Celebrity Child or Kentucky Derby Winner” to highlight the absurdity of some monikers. (It’s actually pretty fun to play, TBH.) But in an increasingly diverse world, it seems more parents are warming up to less traditional names for their children. Over half of the parents polled in BabyCenter’s naming survey said they preferred unusual names for their children — and you can count me as one of them.

My husband and I didn’t pick anything too strange, primarily because we didn’t want our future child’s name to be a source of bullying. But even the most common names can still elicit a joke or two. We agreed on a name we both loved, “Maximilian,” if it turned out we were having a boy, and then we were thrilled when we found out we were. My partner really loved the book Where The Wild Things Are when he was a child and, being the activists we are, we liked that St. Maximilian of Tebessa was the earliest recorded conscientious objector. I honestly thought Max was a common enough name that “Maximilian” wouldn’t cause any issues.

As if his first name wasn’t interesting enough, his middle name is my last name and his last name is the same as my husband’s. Although we’re married, I’ve never liked the idea of a woman taking a man’s name. Plus, since my father passed away, leaving behind only my sister and me, I wanted to carry on the family name in some way. Not everyone gets this explanation, but we figured it was simple enough.

Because Max is now getting to the age where he’s really starting understand his name and what it means, I’ve been wondering how things like mispronunciations will impact him. Since I don’t have a crystal ball or any cool superpowers to see into the future, I thought it would be interesting for a week to make a point of correcting every single person who said his name incorrectly. I’ve been slightly frustrated in the past when people do it, but I really wanted to make an intentional effort to notice how it not only affected us, but what reactions it caused in others.

Doctors And Nurses And ‘Scripts, Oh My!

If you can’t tell from the image above, doctors’ offices just love butchering names. There should only be one “il” in his name, but they were feeling generous and gave us two! Normally, I roll my eyes and quietly make corrections when I see his name misspelled on paperwork or when nurses call out a variation of his name. But this experiment gave me the motivation to finally put a stop to it.

Mispronunciation seems superficial, but it actually causes problems when his name is misspelled after a doctor’s visit. Not too long ago, my son had gotten an ear infection and we were advised by his pediatrician to take him to the ER. After a long and unpleasant visit, we finally left to go pick up his much-needed prescription. His insurance card had his correct name (obviously) but the name for the prescription was the double “il” one. Thankfully we got it all cleared up, but it could have been avoided if people paid attention.

Not willing to let this happen again, I made sure to be vigilant on name duty at a recent doctor’s visit. We were getting ready for the school year, so that meant a check-up, shots, and copies of his records and immunizations for school. Fully aware that I might come off a little “bitchy,” I vocalized my concern before even checking in. I went up to the front desk and politely said, “Hi, we’ve had some issues in the past with my son’s name being misspelled. So I’m writing out his full name legibly and would really appreciate it if you could compare it to your records and make the necessary corrections.”

I was met with the heaviest dose of shade and side-eye I’ve ever received. The receptionist’s eyebrows and judging-you glare let me know she was taking this as a personal critique. Although I’d never accused her of illiteracy or incompetence, you would think that I had. With an incredulous “Uh huh, OK,” she clacked away on the keyboard then asked, “Is this right?” There was that pesky extra “il” again.

When I corrected her, she didn’t say anything but showed me his name, correctly spelled this time. I thanked her, trying to retain my confident tone. Without looking up she sighed, “OK, you can go take a seat in the waiting room then.” I had survived my first attempt to go on the offensive and despite feeling her eyes burning holes in my back, I walked away feeling like a take charge kind of woman. I highly recommend it.

Later, when I was able to pick up copies of his records, I didn’t hesitate to let people know exactly how my son’s name was spelled. I spoke with a different receptionist but she still didn’t seemed thrilled with my approach. She didn’t give me quite the same judgmental look as the previous receptionist, but she did appear irritated by my request to double-check the spelling before printing out his papers. What would be an extra two seconds for her could save me countless time and headaches, so I didn’t feel too bad taking extra precautions.

This year we switched to a different educational center. So that meant a whole new round of introductions and potential corrections. After exchanging pleasantries, we got down to paperwork. I sat with the assistant director to go over details while my husband attempted to keep our son from breaking anything or hurting himself. I handed over his records and waited to see how she would pronounce his name. “Alright, does…” she squinted, pursed her lips, and cocked her head to the side, “… Max have any allergies?”

She did what a lot of people do when they come across his name: shorten it. And to be honest, my family and I call him Max just about as much as we call him Maximilian. Typically I’m not too bothered by this, but I had an experiment to conduct, after all. “Maximilian,” I said, without snobby emphasis, “is lactose-intolerant and is on a vegetarian diet.” I waited to see if she would think me saying his full name was a dig or not.

“Oh! Maximilian! I like that name!” she smiled broadly at me. Since I knew he would be around other children his age who might have some difficulty with a five-syllable name, I went ahead and gave her the green light on shortening it to Max. Before we left, she checked with me once more on the spelling and that was that. No awkwardness or hurt feelings. I was grateful for her upbeat attitude and overall flexible demeanor when it came to name writing and pronunciation.

Perhaps it was her years in education and enrolling children of all backgrounds that helped her seem so easygoing when it came to being told the correct pronunciation. Even though the receptionists at the doctor’s office have also seen many children, I think the school’s assistant director was less offended by name corrections because her job relies on her sensitivity to, and tolerance of, diversity.

I had already conquered my fear of correcting people who mispronounced my son’s name in professional settings, like medical offices and school, but I’d yet to take on the awkwardness of random encounters with strangers. Although I’m extremely extroverted, there’s just something different about small talk with strangers when it involves your child. Most of the time, it’s just friendly waves from elderly people in line at the grocery store, but there can be uncomfortable moments, too.

Over the course of the week-long experiment, it felt like I was somehow making ordinarily casual situations awkward by uncharacteristically correcting people’s mispronunciations. Instead of just a polite smile and nod, I would say, “Actually, it’s Maximilian.” I did my very best not to come off as stuck-up or rude, but there’s really no nice way to correct somebody.

One older gentleman must have asked me three or four times what his name was. When he finally understood what I said, he exclaimed, “That’s such a heavy name for a child!” I chuckled (because what else can you do when that happens?), not quite sure if that was an insult and responded, “Well, he seems to be carrying it just fine.” The man just shrugged and went on his way.

When we were shopping recently, a mom with a child who looked to be about my son’s age happened to be standing next to us. We both said hi because, you know, manners. Our kids started interacting so I asked what her daughter’s name was and she asked for my son’s. I told her, “Maximilian,” but she told her daughter, “Go say hi to Max!” I didn’t make a stink about her shortening it, but then she turned to me and said with an innocent sounding laugh, “My mom’s dog’s name is Max; isn’t that funny?” I was truly dumbfounded. All I managed to say was, “Oh. Weird.”

As I walked up and down the aisles, reflecting on what just happened, I couldn’t help but feel like she was comparing my son to a dog. I’m as big an animal lover as the next gal, but something just felt rude about implying my son’s name is typically a name for a dog. I kicked myself for not having some witty comeback, but sometimes your nerves can get the best of you. I normally just ignore any ignorant and hurtful comments about my son’s name (“Aren’t you afraid kids are going to call him Maxi Pad?”), but this particular one really gave me pause. If there’s anything I’ve learned from name pronunciations with strangers, it’s that you can never guess what they’re going to say.

After my week of correcting everyone who mispronounced or misspelled my child’s name, I learned a lot about egos – of others’ and my own. To my chagrin, I found that I take people’s mispronunciations of my son’s name just as personally as some people take my corrections. While I scoffed at one receptionist’s insulted reaction, I knew I could turn right back around and get defensive. When I tried to articulate those visceral feelings, it was difficult. Did I think people didn’t approve of our name choice? Was I offended that people didn’t take the time to get it right? Or was I secretly nervous that these mispronunciations meant I had indeed cursed my child to a life of name-correcting?

If I’m honest, it was a combination of all three.

Names are extremely personal and can be such an integral part of a person’s identity. So it really shouldn’t surprise anyone that names – how they’re spelled, pronounced, or even received – can have such a profound impact on our perception of ourselves and others. I confronted a spectrum of reactions when I corrected or informed people on my son’s name -- the annoyed, affronted, amused, astounded, and absurd – and realized people's’ egos may bruise slightly at a correction, but at least it seems to be temporary.