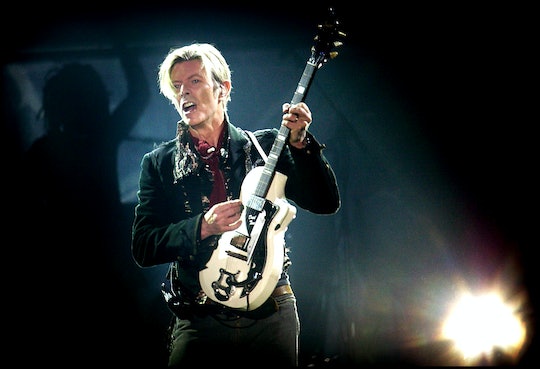 I Couldn't Escape My Abusive Childhood, But I Had David Bowie

I vaguely remember listening to David Bowie while my mom cleaned our house. His space-like melodies and whimsical sadness could be heard just above the roar of our old, heavy vacuum. I clung to those words and magic and otherworld hopefulness at night, when his tracks would replay in my mind as my father screamed and shouted and hit my mother. He threw her dresser drawers down our flight of stairs while I pondered if there was life on Mars. My father put another hole in our upstairs hallway while I wished I was far above the world, sitting in a tin can. David Bowie's music helped me survive an abusive childhood. His songs were the background noise that muted the sounds and abuse of my toxic father.

In some ways, I think that’s why my memories of Bowie’s music are vague: they’re but lingering shadows of a darkness I am consistently attempting to bury behind me. He is a whisper of bad times and an eagerness to rise above them. He is a promise of a glimmering light in an all-consuming despair I’d rather forget altogether.

David Bowie changed his identity so effortlessly, brilliantly highlighting the fluidity of binaries we had carelessly and naively considered steadfast and unwavering. He moved between the worlds he created, and it was no one's business whether they were real or not.

I wanted to paint a lightening bold across my eye and be a different person. A girl with a father who loved her and never hurt her. A girl with a mother who was heard instead of hurt, admired instead of abused. I wanted to grow my hair long and dye it white and wear glamorous blue eyeshadow and call a loving family home. I wanted to feel safe and secure and supported. I couldn’t do any of those things, and there was nothing I could do to change my childhood or the father that made it so toxic.

I admired David Bowie's artistry for the things he could do, and hated him because I couldn’t do them myself.

Yet I admired David Bowie's artistry for the things he could do, and hated him because I couldn’t do them myself. He lived a million lives and I was just trying to survive mine.

Eventually I left Bowie behind, like I did the house and the abusive father that had defined so much of my life. I've always felt that life is wonderful and cruel that way: you can redefine yourself and say goodbye to the bad, but that often means cutting ties with the good, the buffer between you and the pain. Leaving Bowie where he was was, to me, an unforeseeable sacrifice I knew was necessary.

I missed the melodies that saw me through, but not enough to relive the moments they had provided a soundtrack for.

When I woke up to the news of Bowie's death at 69 from cancer this morning, I suddenly ached for the roar of my mother’s heavy vacuum and the space-like melodies that fought against it. I felt a loss that left me yearning for the pain of a household David Bowie unknowingly shielded me from. I laid in my bed and reached out for the vague memories, the ghost of unified hope and pain slipping through my fingers.

After some time, I got up. I took my 1-and-half-year-old son with me to our living room. We have dance parties every morning and, this morning, we danced to David Bowie. “Space Oddity” and “Changes” and “Five Years” were no longer drowning out callous shouts or hiding my father’s next assault; they were loud and bombastic and celebrated by the unapologetic movements of a toddler and his nostalgic mother. We laughed and bopped and swayed and hopped, and I had the lingering feeling that my son knew on some subconscious level that The Goblin King went home.

My ghosts have long since stopped wandering the halls of my mind, haunting me, but the music that helped me fight them lives on. I grabbed Bowie’s space-like melodies and whimsical sadness and squeezed the pain and hatred from them.

And years later, as the world mourned and remembered an iconic artist, I danced in my living room as he was reborn, arms wrapped around my little boy, the sounds from the stereo once again providing the soundtrack. Only this time, the scene was different.

More Like This
Ginger Zee Had A Perfect Response After A Troll Asked Her "Who's Raising Your Kids?"
It's A Beautiful Day In Jenny Slate’s Neighborhood
35 Relatable Quotes That Prove Being A Mom Isn’t Easy
30 Kitchen Mistakes You’re Probably Making (& How To Fix Them)